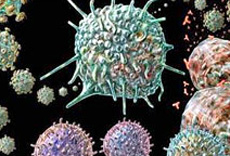 New studies by a team of scientists on human white blood cells have revealed how HIV virus exploits the body’s built-in protection against autoimmune diseases, virtually incapacitating the immune cells. This understanding of how the virus deactivates the immune cells could lead to methods in overcoming the prevailing handicaps in treating HIV, the scientists feel.

According to the team, led by Bruce Walker, a Howard Hughes Medical Institute researcher at Massachusetts General Hospital in the U.S., and comprising researchers from Doris Duke Medical Research Institute in Durban, HIV disarms the T cells sent by the body to fight it by flicking a molecular switch on the cells. The researchers claim they were able to block this switch in the laboratory and restore the functions of T cells.

While there are drugs available to perform this function, the scientists say there is need for more studies in order to ensure the safety of the process.

Walker said one has to proceed with real caution because if an attempt is made to turn back on an immune regulatory switch that the body has decided to turn off, it could trigger serious immunological problems.

He said ideally a treatment would cover the HIV-specific T cells, but there are no techniques at present for such a targeted approach.

The researchers studied blood samples from 71 people who had recently contracted HIV but who had not yet commenced anti-HIV treatment and from four HIV-positive individuals taken before and after they had begun antiretroviral therapy.

Earlier studies have established that as HIV accumulates in the blood, immune cells specific to HIV, called CD8, begin to produce a receptor molecule called Programmed Death-1. As PD-1 builds up on the surface of the CD8 molecules, these become weaker and produce fewer virus-killing chemicals, such as cytokines. The CD8 cells gradually burn out and get clogged with PD-1. Walker says the immune cells continue to be there, but they have been turned off in persons with high level of HIV.

The scientists also found that higher levels of PD-1 were associated with severe functional impairment of T cells. However, PD-1 was found to be dropping with HIV treatment and blocking of the PD-1 pathway restored the function of T cells.

Walker said he would want to see if the T cells can be turned back in HIV-infected people without causing any serious side effects.

He added that in treatment terms, the number of T Cells is counted to decide when to treat an infected person. However, adding the PD-1 measurement could tell doctors about the likelihood of progression of the disease and the need for treatment in infected people.