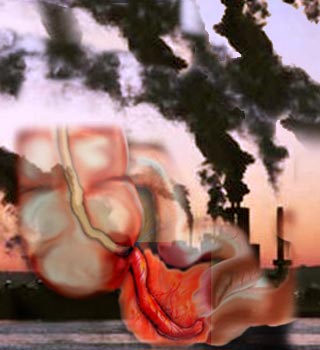 Though we all know of the health hazards caused by air pollution, especially to the respiratory system, it has never really been related to other parts of the body. Well it now appears that a high level of air pollution runs an increased appendicitis risk.

A novel research by a team at the University of Calgary suggests that air pollution may in fact increase the risk of appendicitis. Appendicitis is a condition where in the appendix swells up and fills with pus caused may be by an infection or obstruction. While in many cases there is no particular reason for this, in some cases the appendix gets inflammated and is serious as it holds the risk of bursting in the body putting the patient’s life at risk. Hence it must be surgically removed.

Dr Gilaad Kaplan, the lead researcher remarked, “If the relationship between air pollution and appendicitis is confirmed, then improving air quality may prevent the occurrence of appendicitis in some individuals.”

“It was possible that air pollution had an impact on blood flow in the gut which in theory could make obstruction of the neck of the appendix more likely. Any impact was likely to be more longer term, with prolonged periods of air pollution possibly causing dehydration, which might raise the risk of damage to the appendix. It was also possible that the apparent link between appendicitis and air pollution – both common phenomena – could be spurious”, added Dr Anton Emmanuel, medical director of the digestive disorders charity Core.

Scientists who were part of the Calgary team reviewed nearly 45,000 adults hospitalized for appendicitis between 1999 and 2006. Equipped with data from Environment Canada’s National Air Pollution Surveillance (NAPS) monitors that gathers the hourly levels of ozone, nitrogen dioxide, sulfur dioxide, carbon monoxide and particulate matter of varying sizes, the team tried to associate air pollution and appendicitis. The researchers further evaluated if short-term daily changes in air pollution levels were related to the development of appendicitis using regression analysis.

An interesting discovery of the analysis was that on days of highest ozone concentrations, patients were nearly 15% more likely to be hospitalized as against days with lower ozone concentrations. Other pollutants like sulphur dioxide, nitrogen dioxide, and particulate matter showed similar results, though their effects were not that significant.

A noteworthy finding was that during the summer months, the effects of air pollution were the strongest. It could be possibly because during summer people tend to spend more time outside. Overall the research indicates exposure to air pollutants, ozone in particular did show a considerably increased risk of appendicitis.

Innumerable studies in the past have linked air pollution with promotion of diseases or conditions of inflammation.

The appendix is a small pouch connected to the large intestine. Though its role in the body is unclear it is known to shield a number of beneficial bacteria that help digestion and fight infection.

Presented to an American College of Gastroenterology conference, the study however concludes that pollution does increase the overall risk of tissue inflammation.