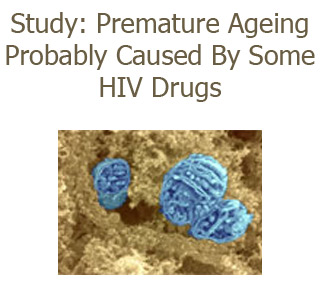 An earlier report revealed how newborns exposed to HIV in Africa were presumably deprived of medication. According to a study conducted by institute of Genetic Medicine at Newcastle University scientists, a section of medication for HIV comprising of anti-retroviral drugs may cause premature ageing. This class of therapy is used specifically in Africa and low-income nations. The study reveals that these drugs harm DNA in the patients’ mitochondria.

The analysis may validate as to why HIV positive people treated with antiretroviral drugs tend to show progressive signs of aging like weakness, cardiovascular problems and dementia at an initial age itself. A section of the drug known as Zidovudine, also known as AZT which is a part of Nucleoside analogue reverse-transcriptase inhibitors NRTIs were the first of their kind to serve as a treatment for HIV. These appeared to be a major discovery that strived to tag the disease as chronic instead of a terminal condition.

High income nations like Europe and North America apparently utilize older NRTIs at a lower degree owing to its toxic side effects when taken for a longer period. The drugs are off-license and comparatively cheaper at present and are therefore deemed to be the bloodline of HIV positive people in low income countries.

Professor Patrick Chinnery, a Wellcome Senior Fellow in Clinical Science from the Institute of Genetic Medicine at Newcastle University, commented, “HIV clinics were seeing patients who had otherwise been successfully treated but who showed signs of being much older than their years. This was a real mystery. But colleagues recognised many similarities with patients affected by mitochondrial diseases – conditions that affect energy production in our cells – and referred them to our clinic.”

Mitochondria are the ‘batteries’ which charge the cells and help them obtain energy to go on with their functions. The natural process of human ageing may result in mitochondria mutations, however it is not affirmed if the mutations are a result of ageing or a subsequence of any other activity. Muscle cells from HIV-infected adults which included some who were administered NRTIs previously, were examined closely to grasp the cellular mechanism.

The findings disclosed that patients who received NRTIs even 10 years back had deteriorated mitochondria in comparison to persons aging naturally. According to scientists, the mitochondrial DNA gets replicated throughout a lifespan. As a person ages, they go on gathering errors. This analysis suggests that HIV drugs trigger the rate at which these errors seem to accumulate. The revelations show that over the period of 10 years, an individual’s mitochondrial DNA may equal the amount of errors present in a normal person aged 20 or 30 years. Another important observation is that even if patients are not presently undergoing medication, they may still be affected by these alterations.

However scientists conclude that even after the side effects, the importance of the drugs cannot be sidelined, considering that they apparently extended the life span of patients in Africa by 10 or 20 years. Africa is supposed to be the hardest hit HIV country where costly medication may not be an option for people. The scientists are now trying to focus on exercise which looks like a remedy to lessen mitochondria damage.