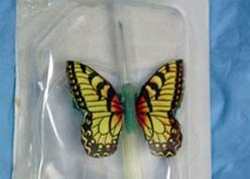 Researchers at the University of New Mexico’s Health Sciences Center believe they have found a way to make patients less fearful of needles — decorate them with butterflies, flowers and smiley faces.

Fear of needles, or needle phobia, can impact the care a patient receives, the researchers said. Some children become hysterical at the sight of needles, while some adults will avoid the doctor’s office altogether.

The researchers said the decorated needles can increase the quality of care when patients are less stressed. Such decorations likely interfere with an established link between visual recognition of a perceived threat and the subsequent emotional response to that threat, the study suggested.

When exposed to the decorated syringes, the aversion in patients was reduced by 68 percent, fear by 53 percent and anxiety by 53 percent, the study found.

Wilmer Sibbitt, a professor in UNM’s School of Medicine, said the decorated medical devices likely form a neurophysiological intervention, resulting in stimulation of brain areas usually not associated with fear, anxiety and aversion.

“It would be great to see these types of decorated needles, syringes, and IV bags mass produced,” he said.