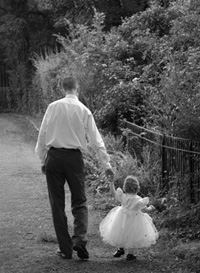 Chemical signs from fathers may be the reason of delay in the commencement of sexual maturity in daughters, as part of an evolutionary approach to prevent inbreeding, claimed researchers at Penn State.

Robert Matchock, assistant professor of psychology at Penn State Altoona said, “Biological fathers send out inhibitory chemical signals to their daughters. In the absence of these signals, girls tend to sexually mature earlier.”

The consequences of chemical signs on sexual maturity are common in the animal world, Matchock noted. If the biological father is removed from rodent families, the daughters tend to mature faster, he said.

“Recently, experts elsewhere discovered a little-known pheromone receptor gene in the human olfactory system, linking the role of pheromones on menarche, or the first occurrence of menstruation,” said Matchock, whose findings are published in the recent issue of the American Journal of Human Biology.

Various researchers, including Elizabeth Susman, the Jean Phillips Shibley professor of biobehavioral health at Penn State, collected menarcheal data from 1,938 college students to explore the link between girls’ social environment and their sexual maturity. The data included information on factors such as the girls’ family size, social environment, and how long the father had been absent.

“Our results indicate that girls without fathers matured approximately three months before girls whose fathers were present,” Matchock said, adding that the data seem to suggest a relationship between length of the father’s absence and age of menarche — the earlier the absence, the earlier the menarche.

Results from the study additionally suggest that the existence of half and step-brothers was also linked to earlier menarche. Girls living in an urban environment also had earlier menarche compared to girls in a rural environment, even when fathers were present for both groups, and had similar levels of education.

Matchock speculates that urban environments offer greater chances to get away from parents’ inhibitory pheromones, and encounter attracting pheromones from unrelated members of the opposite sex.

“It is possible that a stimulating urban environment can negate suppressive cues from parents,” he added.

Taking everything in consideration, the Penn State researcher said the study is not a human anomaly but an explanation of how pheromonal cues modulate sexual maturity, to improve mating and prevent inbreeding.

“Prevention of inbreeding is so crucial to successfully spread healthy genes that anti-inbreeding strategies such as the use of pheromones seem to be conserved across species,” he continued.