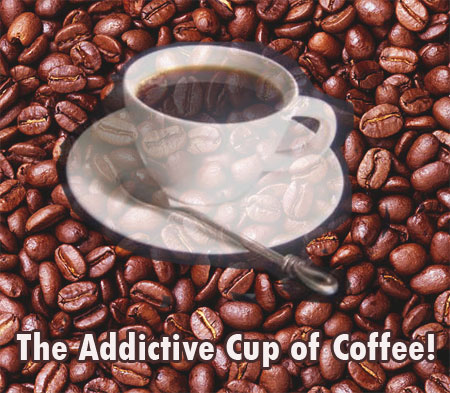 Drinking some or the other type of caffeinated drink is a part of our every day life. Seems coffee gives a boost of energy every morning. Today the office pot is an indispensable fixture in most work places. Business meetings break for coffee and in every corridor of every organization stands a sophisticated coffee and tea machine. Caffeine is also present in high amounts in dark chocolates, and cola drinks.

Coffee is obtained from the seeds of an evergreen plant. Seeds of the fruits of this tree are toasted and ground and the obtained coffee powder sold in the market.

How does coffee act on our body?

The chemical nature of caffeine is 1,3,7-trimethylxanthine.in its pure form. It is a bitter tasting fine white powder. Since it is easily soluble in water it rapidly gets absorbed by blood and hardly takes 10 minutes to reach the brain. Its peak action starts in between 30 to 60 minutes.

Experiments which measured electrical activity of the brain have shown that the caffeine in just one or two cups of instant coffee dramatically changes the pattern of brain activity from a typical resting state to that of an alert, very awake person. And that’s why caffeine has been termed as a psychoactive drug.

Caffeine has its effect on the brain by blocking the action of “adenosine” another psychoactive chemical found throughout the body. Adenosine slows down the release of neurotransmitters-chemicals that carry messages from one nerve cell, continue to fire and fire more rapidly. Caffeine blocks the action of adenosine and thereby keeps one stimulated.

Caffeine also stimulates the adrenal glands (the glands situated just above the kidney) to raise the level of stress hormones-adrenaline, non-adrenaline, and cortisol. These are the ones that are released when we are anxious, scared, angry or nervous.

Now this effect will remain as long as caffeine is there in the blood stream. Meanwhile the enzymes in the liver work to breakdown the drug and remove it from the system.

Smoking stimulates the enzymes that metabolise caffeine and smokers have a 50% faster rate compared with non smokers. This means that smokers experience the effects of caffeine for a shorter time and possibly drink more to compensate. Oral contraceptive pill reduces the rate of metabolism of caffeine and there by its excretion too. And therefore women on oral contraceptive pills tend to react strongly to a second dose of caffeine because there is still a large amount waiting to be metabolized.

Tolerance happens to people who take caffeine regularly and they take more of it to get the same effect. This leads to over-stimulation of the brain, further leading to anxiousness, nervousness, palpitations, fear, unsteadiness and disturbs motor co-ordination within nerves.

There are withdrawal symptoms too seen in people who quit caffeine all of a sudden. These are as follows:

1. Headache approximately 18 hours after his/her last cup of coffee. This headache is likely to become more intense for 3 to 6 hours and may persist even for a day long.
2. One gets a feeling of dizziness because now there is no caffeine or rather decreased caffeine in the blood to stimulate the brain.
3. The victim gets fatigued and tired early morning itself and has no energy left by afternoon.
4. Diminished concentration and mental fogginess (unclear thoughts)
5. Anxiety, depression, anger
6. These symptoms are relived again by taking a cup of coffee. And this again creates a vicious cycle reinforcing the addictive habit further.

1. Good alertness of the mind, thereby increasing the efficiency of work with good concentration.
2. Decision time taking is shortened because of good clarity of thoughts
3. It temporarily removes inertia and fatigue

1. It drains off energy. Although initially it gives a boost or kick to the mind but what you are actually left out with is tiredness and irritability.
2. It causes calcium loss. Caffeine intake increases fecal and urinary calcium excretion resulting in calcium deficiency and also the deficiency of other minerals eg: sodium, magnesium and potassium etc. Calcium loss is further increased by taking more sugar with caffeine.
3. It raises cholesterol. Boiled coffee contains a lipid that powerfully raises serum cholesterol. 4 cups of coffee can increase cholesterol in blood by 5% and ten cups by around 12%.
4. It hinders assimilation of food in intestines by disturbing its digestive process. It can aggravate colitis and piles.
5. In quantities of more than 200 mg per day caffeine can be passed through breast milk thereby disturbing nervous system of infants.
6. Caffeine during pregnancy leads to maternal and fetal anemia (decrease in blood count)
7. Caffeine decreases absorption of vitamin B, which has a vital role to play in energy metabolism, therefore its loss leads to tiredness.
8. Caffeine causes irregular heart beats known as arrhythmia and increases blood pressure thereby increasing the workload on the heart, and adding risk to coronary heart disease patients.
9. It stimulates production of acid, thereby causing heartburn, indigestion, stomach ulcers.
10. Caffeine alters normal sleep patterns. Its users are aroused even by the slightest noise and such people do not feel fresh next morning. This is because it affects out REM sleep (dreaming sleep). Without adequate REM sleep, we become fretful, irritable, tensed and have less concentration.
11. On and off headaches and anxiety episodes which might lead to migraine and depression.
12. Since the kidneys and liver have to overwork in the body of caffeine victim, these organs may suffer after sometime.
13. Caffeine raises blood sugarlevel and thereby aggravates diabetes.

So would you want to yet rush to that coffee machine!?

Incidence of Erectile Dysfunction less in men who have more intercourse