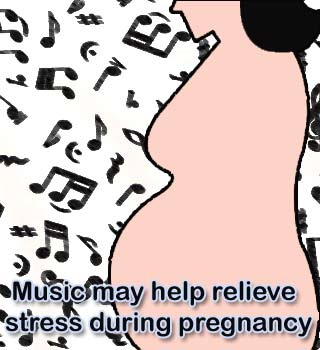 If you are mum to be here’s some bit of information that may help you overcome pangs of anxiety, stress and maybe even depression. Soothing music it seems may be of great help in overcoming stress, anxiety and depression in case you are pregnant.

Researchers from the College of Nursing at Kaohsiung Medical University, Taiwan, claim that music therapy may help lower the psychological stress pregnant women face. Music was found to make the pregnant women less anxious and depressed.

“Pregnancy is a unique and stressful period for many expectant mothers and they suffer anxiety and depression because of the long time period involved. Our study shows that listening to suitable music provides a simple, cost-effective and non-invasive way of reducing stress, anxiety and depression during pregnancy”, says Prof Chung-Hey Chen, lead author of the study.

Women in the music group were assigned 4 music CDs, each with about 30 minutes of music. While one CD featured lullabies, a second CD comprised of classical music and the third and fourth CDs had nature sounds and soothing crystal music of Chinese nursery rhymes and songs respectively. In all the CDs the tempo of music was set to around 60 to 80 beats per minutes synonymous with the human heart rate. The women were then asked to listen to at least one disc every day for two weeks. The control group did not listen to any music.

These participants were then tested on three well established scales for stress, anxiety and depression, both before and after the music session. Before the music session the musical group scored 12.11 for depression on a scale of 0-30, 37.92 on a scale of 20-80 for anxiety and 17.44 on the stress scale that ranged from 0-30. After listening to music, the group showed a drop in pretty much all kinds of psychological stress. Their depression, anxiety and stress levels were lowered by 1.84, 2.13 and 2.15 respectively.

On the other hand the control group showed almost consistent scores. They found a drop of 0.03 in this group’s depression level, a rise of 0.71 in the anxiety level and a drop of 0.92 in the stress level. These results led the researchers to believe that women in the music group were much better off in terms of stress, depression and anxiety.

So if you are one anxious soul especially about your pregnancy, just relax by listening to a couple of great CDs!

The research is published in a special complementary and alternative therapy medicine issue of the Journal of Clinical Nursing.