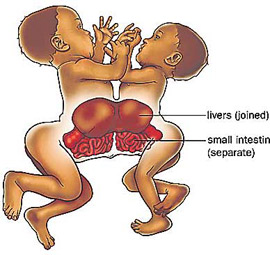 Two Siamese children, who were joined at the stomach, were successfully separated in a six-hour surgery at Nair Hospital in Mumbai, Maharashtra. The twins, Zareen and Aafreen, were born on March 1 this year with a single liver between them and had been kept under observation at the hospital ever since.

The twins’ parents, who could not afford the cost of operation, had abandoned them after birth and the hospital had been taking care of the infants ever since.

Dr Sanjay Oak, dean and chief of paediatric surgery department, said the parents were very poor and already had two daughters before the birth of the twins. As they could not afford the cost of separating the twins, they had left the children in the hospital. “We had been waiting for the children to gain weight before starting the operation. Six months after the children gained about 10 kg, we decided to operate on them and divided the liver between the two,” said Dr Oak.

The first of its kind surgery in Nair Hospital was conducted in two operating theatres in the presence of seven surgeons, led by Dr Oak, six anaesthetics and six nurses. “Zareen and Aafreen are in good condition and their father Nasir Shaikh has been informed of the separation. We plan to keep them under observation for some time before we can hand over the children to their parents,” Dr Oak added.

Such operations have previously been conducted at Wadia and Sion Hospital, but never before at Nair Hospital.