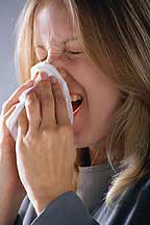 University of Virginia researchers say that you can pick up a cold virus from a household object even a day after the item was contaminated. Once on your fingertips, this virus which is lifted from germ-laden doorknobs, TV remotes and light switches is so much closer to your nose and eyes, greatly increasing your chance of catching a cold.

The small, unpublished study suggests “you don’t necessarily have to be in contact with someone who has a cold to get a cold but just to come into contact with something that they had contact with,” said Dr. Michael Edmond, an infection-control expert at Virginia Commonwealth University.

Frequent hand washing and disinfection are well-known, although not always used, ways to avoid infection, said Dr. Birgit Winther, the U.Va. ear, nose and throat specialist who led the study. The results were presented yesterday in San Francisco at a meeting of the American Society for Microbiology.

Colds are generally caught when you rub your eye or nose with your virus-laden hands, she said. That could happen by direct transmission, such as shaking hands with someone infected, or perhaps indirectly after touching something contaminated and then transferring the virus to the face – the eyes, nose and mouth.

“We tested if viruses can be picked up by an uninfected person,” Winther said.

The study was conducted in a hotel. U.Va.’s internationally renowned cold research is often conducted in hotels for convenience, not because hotels are particularly germy.

Fifteen adults with lab-confirmed rhinoviral colds stayed overnight. Before checking out the next day, they identified 10 objects they had handled. The researchers then tested the 150 items and found that about a third were contaminated with rhinovirus, which causes more than a third of colds.

The virus was found on seven of 14 door handles and six of 14 pens, but it also lingered on light switches, faucets, telephones and remote controls.

Six volunteers returned to the hotel two months later, where researchers had contaminated items with the volunteers’ own frozen mucus gathered during their earlier colds. In one room, the virus was left to dry for an hour, and in the other, overnight for 18 hours.

The participants were encouraged to use the contaminated items.

In the one-hour room, 60 percent of the contacts transferred the virus to the volunteers’ fingertips. A third of the contacts in the overnight room resulted in contamination.

“While transmission of rhinovirus through dried nasal mucus on surfaces is not efficient, people still should understand that the virus remains available for transfer at least one day,” said U.Va. cold specialist Dr. Owen Hendley, one of the researchers.

Rhinoviruses are most active in early fall, spring and summer. VCU infectious-disease expert Dr. Richard Wenzel called the U.Va. study provocative, in part because this viral family has been implicated recently in the more severe diseases of asthma and bronchitis.

The study also points out the need, particularly in cold season, to wash your hands and clean commonly used household or office items that people might not consider, Winther said.

“Those common things we all touch, like the microwave buttons and refrigerator doors, they would be similar to what we found [contaminated] in the hotel study,” she said.