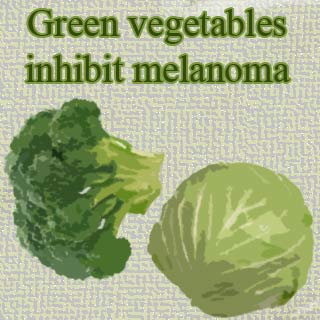 Cancer researchers’ state that the compound extracts from certain vegetables could possibly turn out to be a potential treatment against melanoma. They state that the compound extracts from cruciferous vegetables, along with selenium, have the capability to aim for the tumor in a more effective and harmless way as compared to other conventional treatments. This research was conducted by the Penn State cancer researchers.

The researchers had earlier highlighted the beneficial effects gained from specifically aiming for the Akt3 protein, in preventing the onset of melanoma. Thus they set out on a search to look for a potential drug that can effectively curb this particular protein. In this search, they came upon the isothiocyanates compound. To test the validity and effectiveness of their findings, the researchers conducted a test on mice that were injected with cancer cells.

“There are currently no drugs to target the proteins that trigger melanoma. We have developed drugs from naturally occurring compounds that can inhibit the growth of tumors in mice by 50 to 60 percent with a very low dose.” says Gavin Robertson, associate professor of pharmacology, pathology and dermatology, Penn State College of Medicine.

The compounds in vegetables like broccoli and cabbage are believed to have certain properties that fight against cancer; however their potency is very low. Thus the development of a potential drug would mean a use of huge amounts of these compounds. To combat this criterion, the researchers manipulated these compounds by substituting their sulfur bonds with selenium.

Robertson says that, “Selenium deficiency is common in cancer patients, including those diagnosed with metastatic melanoma. Besides, selenium is known to destabilize Akt proteins in prostate cancer cells.” The researchers believe that the outcome of this would be a drug which is more powerful and can be provided intravenously in low doses.

To test this drug, they injected mice with 10 million cancer cells. When large tumors formed in these animals, they were categorized into two groups. One group was treated with vegetable compounds alone, while the other was treated with the compounds in which selenium was added.

It was noticed that the compounds in which selenium was added, reduced the amount of Akt3 protein production. These selenium-enhanced compounds also reduced the tumor growth by about 60 percent, in comparison to the capability of the vegetable compounds alone.

The researchers state that they have made use of something found in nature to fight against melanoma. And since small amounts of this drug are needed to combat against cancerous cells, the patient might even face lesser side effects. However, it is also said that human trials need to be conducted to test the validity of this novel drug.