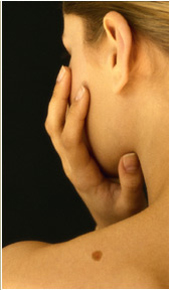 University of Michigan scientists have discovered how pigment-producing cells in moles known as melanocytes block cancer-causing mutations. Moles on the human body, which are usually considered quite harmless, may not be harmless after all, as sometimes pigment-producing cells in moles called melanocytes start dividing abnormally to form a deadly form of skin cancer called melanoma.

Although the scientists knew that 30 percent of all melanomas begin in a mole and that 90 percent of moles contain cancer-causing mutations, what they didn’t know is how melanocytes stop these mutations from triggering the development of cancer.

But now they have found the answer to this important question in an unexpected place – a structure inside cells called the endoplasmic reticulum, or ER.

Soengas, who is an assistant professor of dermatology in the U-M Medical School said, “Our results support the direct role of the endoplasmic reticulum as an important gatekeeper of tumor control,” “Until now, no one knew there was a connection between ER stress and the very early stages of tumor initiation,” he added.

The endoplasmic reticulum is the cell’s protein production factory. The process begins when chains of amino acids are deposited in the ER membrane in response to coded instructions from genes. Chaperone proteins fold these amino acids into specific shapes. When too many of them build up in the membrane, or when something goes wrong with the folding process, the system gets bogged down. This can stress or even kill the cell.

To prevent this, the ER sends out distress signals to activate what scientists call the unfolded protein response (UPR). This slows the protein production process and gets rid of excess incoming amino acids, giving the ER a chance to catch up. If that doesn’t work, the UPR causes the cell to destroy itself in a process called apoptosis.

“Traditionally, the ER’s role was considered to be limited to protein folding or protein modification. But scientists like Randal Kaufman, a U-M professor of biological chemistry and co-author on our paper, have found that the ER can sense changes in glucose, nutrients, oxygen levels and other aspects of cellular physiology associated with diseases like diabetes and Alzheimer’s disease,” Soengas said.

“In our study, we found that the ER senses the activity of certain oncogenes in the melanocyte and triggers a response that prevents the malignant transformation of these cells,” Soengas added.

According to Soengas, the tumor suppressive mechanism induced by the ER in melanocytes with these cancer-causing mutations is premature senescence, which is a form of “suspended animation” that stops the cell cycle and keeps cells from dividing, but doesn’t kill them.

“The cells are held in check and they don’t die, but they don’t proliferate either,” Soengas explained. In the case of moles, melanocytes can stay this way for 20 to 40 years or even your whole life. For most of us, just holding cells in an arrested state is sufficient to prevent the development of cancer. That’s why so many people have moles, but few have melanoma.”