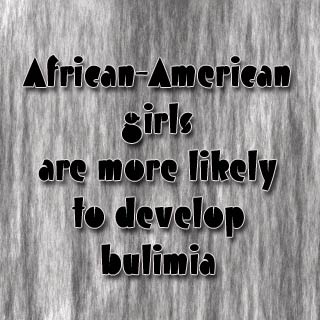 A significant new study on bulimia has reported that African-American girls may be 50 percent more prone to bulimia as compared to white girls. It was further stated that the girls from the lowest income families had a significant increased risk of experiencing bulimia as compared to the girls from the highest income families. This study was conducted by University of Southern California, in collaboration with University of Maryland and the Universitat de Autonoma Barcelona, Spain.

The National Eating Disorders Association has estimated that more than 9 million females in the United States suffer from this disorder. It has been stated that bulimia may have various consequences on the health of adult patients, including heart failure, possible rupture of the esophagus from frequent vomiting and tooth decay. On the other hand, in adolescents, bulimia may possibly have lasting effects on their physical development. It has also been stated that out of those identified with bulimia, only about half recover completely from this disease, while many of them may have to struggle with it for a long time.

Michelle Goeree, economist, University of Southern California, says that, “As it turns out, we learned something surprising from our data about who bulimia actually affects, not just who is diagnosed. The difference between public perception and our results is striking.”

The study investigators conducted this study with the aim of discovering a more truthful image of bulimia among young girls. For this purpose they surveyed young subjects starting from the age of 9 or 10. These participants were surveyed every year about their eating habits and other related psychological issues.

According to Goeree, past studies may have been more dependent on hospital admission data, which had in turn created a “sample selection bias”. This may have overlooked those who displayed bulimic behavior but did not receive or have the resources to receive professional help.

This study may have many important repercussions. On the basis of these findings, it was stated that, the status of bulimia should be changed from a disorder to an addiction which would in turn ensure more federal, state and local treatment programs.