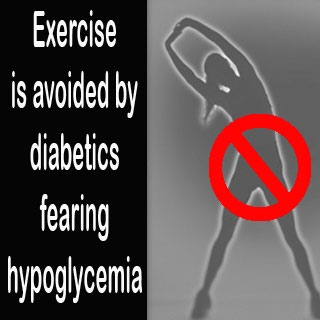 According to a latest study, diabetics who fear physical activity are said to have lesser control over their diabetes. Apparently, they avoid physical activity in fear of the exercise-induced hypoglycemia or low blood sugar and also many more effects like loss of consciousness.

Anne-Sophie Brazeau, lead author and doctoral student at the Université de Montréal, says that, “Our study was launched to find ways to make diabetics healthier and suggests there is a major gap in information and support required by these patients. Programs aimed an increasing physical activity among type 1 adult diabetics need to incorporate specific actions to prevent hypoglycemia.”

Dr. Rémi Rabasa-Lhoret, a professor at the Université de Montréal’s Faculty of Medicine and an endocrinologist at the Centre hospitalier de l’Université de Montréal, co-author of this study says that, “Our findings confirmed our clinical suspicion. Exercise has been proven to improve health and one would assume diabetics would remain active. Yet our findings indicate that type 1 diabetics, much like the general public, are not completely comfortable with exercise.”

50 men and 50 women had to undergo a questionnaire. All of the participants were suffering from type 1 diabetes and were found to avoid physical activity. One of the biggest hurdles was found to be hypoglycemia, others included work related time constrains, loss of control over diabetes and low levels of fitness.

On further questioning, only 52 of the participants were aware of the manner of metabolizing insulin and its process in the body. The people who were aware of the process of the working of insulin in their body were less fearful of physical activity. It is stated that this type of knowledge is very crucial to adapt insulin and keep food consumption in check, in order to avoid hypoglycemia through exercises.

Their findings are published in the Diabetes Care issue.

Alcohol tolerance switch seems to have been found in fruit flies