Here is some good news for aging hippies- smoking pot may help to ward off Alzheimer’s disease. New research shows that the active ingredient in marijuana may prevent the progression of the disease by preserving levels of an important neurotransmitter that allows the brain to function. 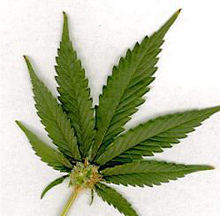 Researchers at the Scripps Research Institute in California found that marijuana’s active ingredient, delta-9-tetrahydrocannabinol, or THC, can prevent the neurotransmitter acetylcholine from breaking down more effectively than commercially marketed drugs.

THC is also more effective at blocking clumps of protein that can inhibit memory and cognition in Alzheimer’s patients, the researchers reported in the journal Molecular Pharmaceutics. The researchers said that their discovery could lead to more effective drug treatment for Alzheimer’s, the leading cause of dementia among the elderly. Those afflicted with Alzheimer’s suffer from memory loss, impaired decision-making, and diminished language and movement skills.

The ultimate cause of the disease is unknown, though it is believed to be hereditary.

Marijuana is used to relieve glaucoma and can help reduce side effects from cancer and AIDS treatment.

Possessing marijuana for recreational use is illegal in many parts of the world, including the United States, though some states allow possession for medical purposes.

Female face easier to read than a male face