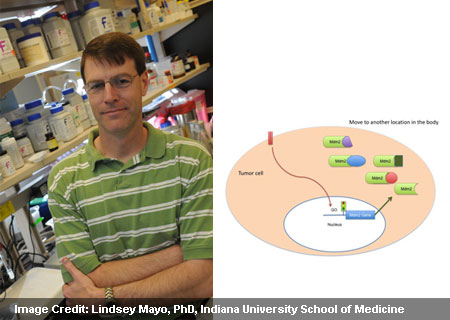 Every new research in the cancer space seems to raise the hopes of patients. Recently researchers from the Indiana University School of Medicine and colleagues at the University of Texas Southwestern and Case Western University claim to have put forth a novel understanding of how to prevent the destruction of a tumor suppressor. This new analysis may probably make way for treatments in late stage cancers.

The investigators seem to have ascertained how the protein Mdm2 that increases in late-stage cancers could probably be disabling the gene which restrains the growth of tumors. Seemingly, this finding may result in the development of enhanced drugs that could help combat late stage breast cancer. Additionally, it may also help fight other malignancies that are otherwise difficult to treat.

As part of the research, the experts claim to have recognized an essential pathway that excites the production of Mdm2. this could probably be causing an augment in the protein level that appears to bind to p53 which is considered to be one of the most common tumor suppressors. Besides, it may also increase other tumor suppressors, and extinguish tumor suppression activity.

Supposedly keeping Mdm2 inactive and avoiding the destruction of the tumor suppressor that Mdm2 targets, could be critical in preventing cancer from spreading within the body. This was suggested by principal investigator Lindsey Mayo, Ph.D., assistant professor of pediatrics at the Herman B Wells Center for Pediatric Research at the IU School of Medicine and an Indiana University Melvin and Bren Simon Cancer Center member.

To better elucidate the role of Mdm2 along with the function of the newly recognized pathways, Dr Mayo utilized the analogy of a florescent ceiling fixture. It involved Mdm2 as the fluorescent bulb.

“Initially, it was only known that the light was on, not how it was turned on. We discovered the wall switch and wires that connect to the light fixture to turn on the fluorescent light. This work provides new evidence about an important mechanism that tumor cells use to promote metastasis. While it has long been known that the loss of tumor suppressor activity triggers cancer, knowledge of how these cancer inhibitors are turned on and off has eluded researchers. Understanding the signaling pathways that elevate Mdm2 is critical to preventing cancer from spreading within the body and key to attacking many late stage cancers,” said Dr. Mayo, a molecular biochemist who studies the mechanisms that control tumor suppressors.

Dr Mayo further explains that though its too early to figure out the chemical compounds that may result in successful drugs, new insight into Mdm2 and its pathways could provide a roadmap useful for stimulation of new compounds. These compounds could possibly bind Mdm2 so as to inhibit the protein, eventually curbing its attack on tumor suppressors.

The study appears in the January 2010 issue of the Journal of Clinical Investigation.