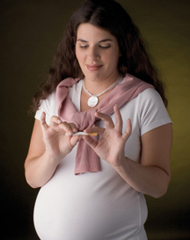 “They think a smaller baby will be easier to push out. What we try to tell them is that healthy eating during pregnancy and remaining relaxed are much more important. If they have any concerns, they should speak to a midwife rather than getting their information from magazines,” said a spokeswoman.

Gail Johnson, who has been a midwife for 20 years, however said there was no evidence that having a smaller baby reduced pain in labor. “A small baby is very appealing for some girls who are frightened at the prospect of giving birth,” she said. But what they don’t realise is that the stretching sensation is the same regardless of the weight of the baby,” she said.

“The best way to reduce labor pains is to remain fit and well during pregnancy. Labour is hard work and you need as much energy as possible to cope with it,” she added.

Caroline Flint, who is the new Labour member for the Don Valley constituency in South Yorkshire, said that there is a potential link between smoking, underweight babies and teenage mothers.

She further said that smoking while being pregnant does reduce a baby’s weight but it doesn’t help in reducing labour pain. She also said that a number of teenage girls are fooling themselves by not perceiving smoking as a health risk.

“It is important that we understand what stops young women making healthy choices so that we can provide the right answers to their concerns. In this case childbirth is no less painful if your baby is low weight. So smoking is not the answer; pain relief is,” Flint said.

Studies further showed that smoking during pregnancy accounts for undernourished babies that are unable to control their temperature and deal with jaundice and are at a greater risk of cot death. They are also likely to suffer ailments such as chest and ear infections and experience delays in physical and intellectual development. Smoking also hinders the growth of an unborn child by reducing the amount of oxygen and nutrients it receives via the placenta and umbilical cord.

“Our advice remains that women should not smoke during pregnancy,” A Department of Health spokesman said.

Sounds bizarre, but its true!