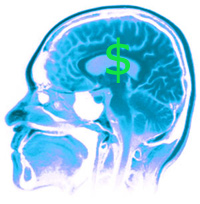 Scientists may have found the brain area where selfishness roosts, coaxing it to be generous instead of greedy. That part of brain is called the right dorsolateral prefrontal cortex (DLPFC), say the researchers. The study included 52 men in their 20s with no history of mental illness. Each man played an “ultimatum game” in which their partner offered to split $20 with them. Some deals were better than others.

The worst deal was for the man to get $4 while his partner took $16. The best deal was an even $10 split. The men couldn’t counter. They could only accept or reject the offers.

If they accepted, the deal went through. If they declined, no one got any money.

The gist of the game is this: If you’re being selfish, you take every offer, even if it’s not great, because you want to get something rather than nothing.

But if you emphasize fairness, you’re more likely to turn down bad offers because they’re unfair, or so the theory goes.
The experiment had another twist. Two-thirds of the men played the game for the first time in their lives 15 minutes after getting a mild shock to temporarily disrupt their right or left DLPFC.

For comparison, the other third of the group played the game for their first time ever after getting a sham shock.

The most selfish players were the men who had received the magnetic shock to their right DLPFC.

Forty-four percent of them accepted the worst offer made by their partner.

“In fact, 37% of the subjects accepted all unfair offers after right DLPFC disruption, while no subjects in the sham or left DLPFC group accepted all of them,” the researchers write.

After the game, the men said they recognized fair and unfair deals during the game. But their selfishness overtook their sense of fairness if their right DLPFC had been disrupted.

All of the men rated similarly on personality tests of impulsiveness and fairness, the researchers note.
The findings may shed light on psychological disorders marked by “excessive selfish tendencies and a failure to obey basic social norms,” write the researchers.