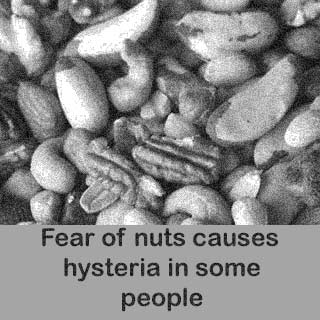 It is stated that in US, a peanut on the floor of a school bus, supposedly, prompted an immediate evacuation and decontamination, in order to avoid any possible allergies in the children in the bus, caused by nut consumption.

The British Medical Journal Online, apparently, states that extreme steps taken to lessen nut exposure is not limited and is believed to be the cause of spreading anxiety and fear among people. A UK allergy expert, supposedly, went to the extent of saying that a similar “epidemic” is faced in Britain as well.

A professor of medical sociology at Harvard Medical School, Professor Nicolas Christakis, says that there was “a gross over-reaction to the magnitude of the threat”, caused by food allergies in general and nut allergies in particular. Experts call the extent to which some measures are taken to protect children with nut allergies, apparently, absurd and hysterical.

According to Professor Christakis, “The issue is what accounts for the extreme responses to nut allergies.” The issue is not whether nut allergies exist or if they may be seldom serious or even if preventive measures were to be taken for the children who reported grave allergies.

It’s said that, in spite of clear proof that major restrictions need not be taken, certain US schools are boasting of being “nut free”, by banning home-made baked goods, peanut butter, and basically every food without a detailed ingredient label. About this, he says that such extreme reactions are possibly an indication of mass psychogenic illness (MPI), earlier called the epidemic hysteria.

Such MPI outbreaks are more commonly believed to be witnessed in small towns, schools and factories. Healthy people, due to a fear of contamination, start getting anxious, and this in turn triggers anxiety in other people as well. Severe measures make parents anxious and sensitive. These measures are said, to give birth to the epidemic that they had originally set out to curb.

A latest study says that, early exposure to peanuts may prove to reduce the risk of allergies rather than increase it.

Christakis finishes off by hoping for a practical strategy to soon sort out this dilemma, before it gets very grave.