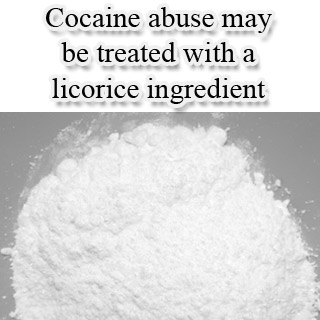 Cocaine is a highly addictive drug which is abused worldwide. However, a potential antidote has been discovered to treat the toxic effects of this highly addictive drug. It is said that an ingredient in licorice could be used as an effective cure for the effects of cocaine abuse, including an overdose of this drug. This study was conducted by the researchers in Korea and Pennsylvania.

Addictive drugs, including cocaine, fuel dopamine production, which in turn generates a pleasurable and good feeling in an addict. An urge to re-experience this feeling time and again, prompts such addicts to keep using this drug. The effects of this drug last for a very short while, which urges the user to keep using it continuously, which makes it even more dangerous and addictive.

The study investigators state they had discovered that apparently there is no effective medication to effectively treat cocaine addiction. However, their latest study on animals revealed that an ingredient in licorice, known as isoliquiritigenin, could be useful for treating cocaine addiction. This ingredient was noticed to be capable of obstructing the nervous system’s production of dopamine. This is a region which is involved in movement, emotion and various other brain activities. Thus, it is stated that medications that curb dopamine production restrict the user’s pleasurable and addictive response to the drug.

In order to prove and better understand this theory, the study investigators injected rats with isoliquiritigenin, before introducing them to cocaine. It was noticed that the rats demonstrated a 50 percent lesser behavioral effect than what is commonly linked with this addictive drug. It was also noticed that isoliquiritigenin even shielded the brain’s nerve cells from any cocaine-induced damage.

Their study, “Proteomic and Behavioral Analysis of Response to Isoliquiritigenin in Brains of Acute Cocaine Treated Rats,” is present in the Journal of Proteome Research, American Chemical Society.