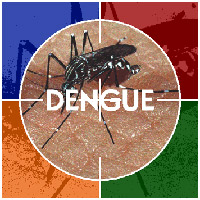 India is struggling to cope with outbreaks of mosquito-borne diseases that have killed more than 100 people and infected thousands of others in recent weeks. Most of them have been stricken with the mosquito-borne disease, dengue fever, which can be fatal. The disease usually surfaces after the annual monsoon season ends in September and leaves behind pools of stagnant water that become breeding grounds for mosquitoes.

Transcending all barriers, the mosquito-borne disease reached Prime Minister’s residence on Wednesday and took his grandsons and son-in-law as victims. More cases are increasingly being reported from across the country and representatives from various northern states will meet in the Capital on Thursday to take stock of the alarming situation.

Given below is the state-wise breakup of dengue outbreak:

India’s health minister Anbumani Ramadoss met with health officials from northern states affected by the disease. He is asking people not to panic, saying hospitals are well-equipped to treat dengue fever. He says the disease has claimed 38 victims so far – 15 of them in New Delhi.

Ramadoss says a construction boom in New Delhi is partly responsible for the outbreak, as stagnant water is collecting in pits at massive construction sites across the city. He also calls for greater public awareness about the need for better sanitation.

“Dengue is primarily a sanitation problem, secondary a health problem. Because of [a lack of] sanitation, hygiene, and lot of construction activities have been happening,” he said. “It is not only a government responsibility, but individual, collective responsibility, a household responsibility of the public.”

Municipal workers have fanned out across New Delhi to spray insecticide and clean up pools of stagnant water. Children have been advised to wear long-sleeved clothing to school.

Even as the north of the country worries about dengue fever, the southern state of Kerala is battling with another disease that has killed more than 70 people and affected thousands of others. Local authorities believe a rare mosquito-borne virus, which causes a disease known as chikungunya, is sweeping the region. A while ago, Chikungnuya had hit the rural areas of Maharashtra.

In Kerala, 61 people have reportedly died and 20,000 people have been hospitalised since the fever epidemic hit the state. It’s feared that Chikungunya’s hit Alappuzha, Ernakulam, Kottayam and Thiruvananthapuram.