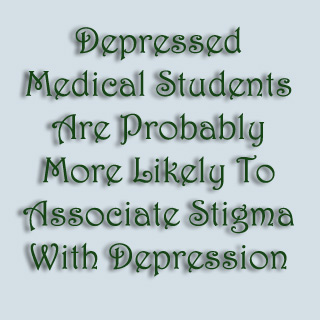 From many past decades depression has apparently been associated with suicide attempts. It now seems that depressed individuals fear stigma. A latest study claims that depressed medical students are more likely to be scared of stigma than nondepressed students and have a higher rate of suicidal thoughts. It was mentioned that medical students share less chances of receiving treatment as compared to the general people because stigma is linked with depression.

The study examined prevalence of self-reported depression and suicidal ideation among medicals students. Authors aimed to analyze the perceptions of depression stigma by both depressed and nondepressed students. 769 students enrolled at the University of Michigan Medical School were surveyed by the investigators from September-November 2009. The survey response rate was 505 out of 769 which formed 65.7 percent. The prevalence of moderate to severe depression appeared 14.3 percent.

Authors elucidate, “Medical students experience depression, burnout, and mental illness at a higher rate than the general population, with mental health deteriorating over the course of medical training. Medical students have a higher risk of suicidal ideation and suicide, higher rates of burnout, and a lower quality of life than age-matched populations. Medical students are less likely than the general population to receive appropriate treatment, perhaps because of the stigma associated with depression. Students may worry that revealing their depression will make them less competitive for residency training positions or compromise their education, and physicians may be reluctant to disclose their diagnosis on licensure and medical staff applications.”

Investigators highlight, “These results suggest that new approaches may be needed to reduce the stigma of depression and to enhance its prevention, detection, and treatment. The characteristics of medical education emphasizing professional competence and outstanding performance might be explored as reinforcing, rather than potentially sabotaging, factors in the creation of a culture that promotes professional mental health. The effective care of mental illness, the maintenance of mental health and effective emotional function, and the care of professional colleagues with mental illness could be taught as part of the ethical and professional responsibilities of the outstanding physician and become a critical component of the teaching, role modeling, and professional guidance that medical students receive as part of their curriculum in professionalism.”

Scientists observed that 1.4 percent first and second year students and 7.9 percent third and fourth year students underwent suicidal ideation. Differences in stigma perceptions were monitored by depression score. Experts claim that students with higher depression scores felt that telling a counselor would be risky and that asking for help would mean the student’s coping skills were inadequate. This belief was apparently stronger than those with no to minimal depression. 83.1 percent with moderate to severe depression scores appeared to be unable of handling medical school responsibilities during depression. On the other hand, 55.1 percent felt the same when depressed.

56.0 percent medical students with moderate to severe depression scores felt that in depression medical students would respect their opinions less than those with no to minimal depression. Similar feelings were reported by 23.7 percent nondepressed students. It was also enlightened that 36.3 percent men and 20.1 percent women assumed depressed students to endanger patients. Experts mention that 34.1 percent first and second year students more frequently agreed than 22.9 percent third and fourth year students that seeking help for depression would make them feel less intelligent. It was concluded that students with high depression scores are less likely to seek treatment if depressed

The study is published in the September 15 issue of JAMA, a theme issue on medical education.