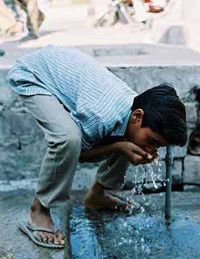 Even as headlines of other deadly diseases like Dengue and Chikungunya flood the Indian newspapers, yet another deadly virus called Coxsackie-B has hit the impoverished eastern region of Uttar Pradesh in India. Coxsackie-B has already claimed the lives of nearly 190 children in the last six months.

Coxsackie-B, the virus is spread through contaminated water and food. The virus is named after Coxsackie, a town in New York state, where it was discovered.

“On an average, Coxsackie-B has been taking the life of at least one child every day,” said a professor in the Department of Paediatrics at the Gorakhpur Medical College, K P Kushwaha. “Thanks to the large scale vaccination of about seven million children earlier this year, JE was nipped in the bud this time. However, we are busy tackling Coxsackie-B, which is nearly as dangerous, though not as fatal, as encephalitis,” Kushwaha said.

Last year, nearly 1400 children had died of a disease known as Japanese encephalitis, which is also a viral disease transmitted from pigs to humans.

Kushwaha’s department remains the nodal centre for treatment of most water-borne and mosquito carried viruses that are a perennial feature in eastern UP.

“It could also sometimes lead to multi-organ failure,” said a professor at the Sanjay Gandhi Post-Graduate Institute, T N Dhole. “Its symptoms are quite similar to those of JE,” he added.

“Unlike JE, the spread of Coxsackie-B cannot be prevented by vaccination. The only way to keep this virus away is by ensuring good sanitation standards and maintaining supply of clean drinking water,” he said.