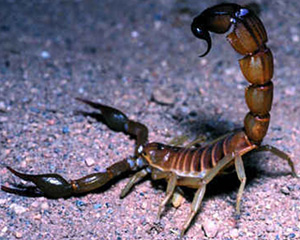 Scientists in the US have claimed that scorpion venom may help in the treatment of a wide range of cancers.

Scorpions occur naturally in parts of Africa, America, India and the Caribbean. Although the sting is extremely painful and requires treatment, majority of scorpions are harmless to human beings

Researchers have found that when applied to tumors, the chemical chlorotoxin found in scorpion venom can distinguish cancer from healthy tissue, even when it affects only a few hundred cells and could improve the treatment of a wide range of cancers, reported the online edition of the Daily Mail.

Scientists believe it will help guide surgeons and result in more successful treatment.

“By allowing surgeons to see cancer that would be undetectable by other means, we can give our patients better outcomes,” said James Olson, a doctor who led the US research team.

By joining the chemical chlorotoxin to a fluorescent marker, Olson and his team created a molecular beacon that lights up tumors. Painting a suspect area with the compound makes it easier for surgeons to remove every bit of cancer without damaging the surrounding healthy tissue.

This is especially important in the brain, where 80 percent of recurring malignant tumors appear at the edges of the surgical site. The paint marks out tumors with at least 500 times more sensitivity than a magnetic resonance imaging scan, the researchers found.

The scientists said that in tests on mice, it highlighted brain tumours as small as one millimetre in diameter. They are now preparing for human clinical trials. The researchers said the technique could be used in operating theatres.