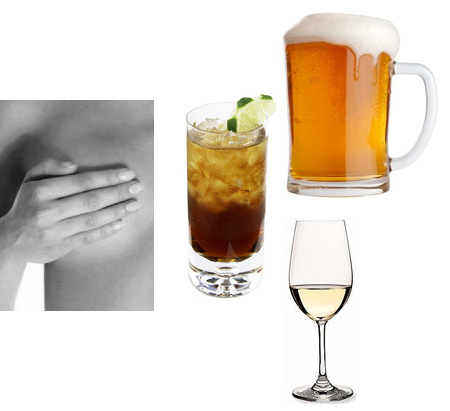 Ladies watch out. Every occasion that you raise a toast on may perhaps get you closer to a common type of breast cancer.

A major US study has associated alcohol intake to a heightened risk of the most common type of breast cancer in postmenopausal women. The latest study is being claimed as the biggest of three major studies that brings to a close that drinking raises the risk of breast cancer for older women.

Data from over 184,000 women was gathered to draw upon the conclusion of this study. The study was led by Jasmine Lew, a researcher at the National Cancer Institute.

It was found that women who consumed one to two small drinks a day were 32 percent more likely to develop a hormone-sensitive tumor. On the other hand, in women who had three or more drinks a day the risk raised upto as much as 51 per cent.

The findings which have been presented at a conference of the American Association for Cancer Research, note that the risk stands common to any and every type of alcohol.

It has been observed that around 70 percent of women who are diagnosed with breast cancer have tumors that are positive for both the estrogen and progesterone receptors. Lew notes that the results derived from the NCI study lend credence to the theory that alcohol’s interference with the metabolism of estrogen raises the risk of cancer.

Though she believed that making health recommendations at this point of time would be too early a step to take, she did note that women should consult their doctors to gauge the risk factors and consider lifestyle alterations.

Well, though the credentials of this study cannot be disputed, for sure most women may be in a dire state of confusion as on one hand there’s a study that links alcohol with breast cancer, and on the other there are researches that vouch for the key role of wine in the protection of dementia in women. So do women have to actually welcome one to negate the risk of the other?