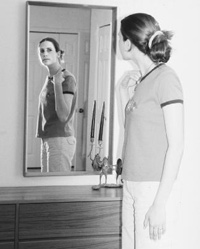 A new test that analyses carbon and nitrogen found in hair can actually detect eating disorders. Nowadays, eating disorders have become the norm of the day, with people wanting to have stick figure frames. This is a disease and if left untreated can lead to heart problems, malnutrition and other potentially fatal complications.

Eating disorders can be difficult to diagnose as patients don’t realize that they have a problem, or they may even try to hide it. It has been found that more than 90 per cent of people with an eating disorder are women between the ages of 12 and 25. There are also many older women and men who have these disorders too.

The new test was developed by researchers at Brigham Young University and this test is capable of telling with 80 per cent accuracy whether someone has anorexia or bulimia.

“Your body records your eating habits in the hair. We can use that to tell the nutritional health of a person,” said lead researcher Kent Hatch, an assistant professor of integrative biology at BYU. As hair grows, new proteins are added to the base of each strand, pushing the strand up and out of the hair follicle. These proteins are influenced by what you eat. The nutritional state of each individual is affected by eating patterns. The study aimed to see if protein patterns differed between people with eating disorders and those with normal eating behavior. The test required only five stands of hair, researcher Kent Hatch said.