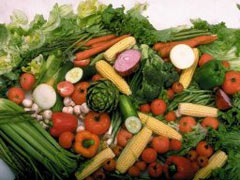 Everyone would love to slow down their mental decline as they age? Three servings of vegetables – particularly green, leafy ones – may answer your prayers, new research shows.

However, the research also suggests the same effect is not found in those who eat lots of fruit. “It’s a modest effect,” said Martha Clare Morris, associate professor at Rush University Medical Center in Chicago and the lead author of the study.

“People who consumed two or more vegetables a day had a 35 to 40 percent decrease in the decline in thinking ability over six years. That’s the equivalent of being five years younger in age.” The study results are published in the October 24 issue of the journal Neurology.

Of the different types of vegetables consumed by participants, green leafy vegetables had the strongest association to slowing the rate of cognitive decline.

The study also found the older the person, the greater the slowdown in the rate of cognitive decline if that person consumed more than two servings of vegetables a day.

Surprisingly, the study found fruit consumption was not associated with cognitive change. This was unanticipated and raises several questions, said Morris.

“It may be due to vegetables containing high amounts of vitamin E, which helps lower the risk of cognitive decline. Vegetables, but not fruits, are also typically consumed with added fats such as salad dressings, and fats increase the absorption of vitamin E. Still, further study is required to understand why fruit is not associated with cognitive change.” Morris says the study’s findings can be used to simplify public health messages by saying people should eat more or less of foods in a specific food group, not necessarily more or less of individual foods.