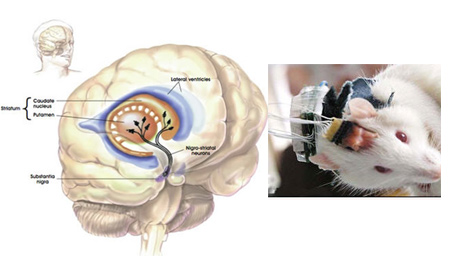 Scientists at the Nara Institute of Science and Technology in western Japan have implanted a small camera in the brain of a mouse. They plan to use this experiment to see how memory is formed. They hope that eventually this could be applied to humans to treat illnesses like Parkinson’s disease.

The study used a camera which was 3mm lone and 2.3mm wide and 2.4mm in depth. It was conducted by Jun Ohta, professor at Nara Institute of Science and Technology in western Japan and has colleagues.

Ohta implanted the special semiconductor camera inside the hippocampus of the mouse’s brain designing the device so that a screen showed a blue light whenever the camera captured memory being recorded by the brain.

The researchers then injected the mouse with a substance that lights up whenever there is brain activity. The camera then captures that light and the visuals then come up on the screen.

Now, the team plans to use the camera while the mouse is walking,

“we are thinking about how to apply this to humans, though we must be very careful, as it involves implanting something into the brain,” said Ohta.

He also added that it would take at least 10 years to be done.