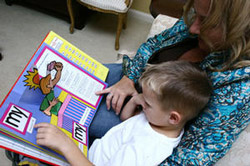 A set of simply designed exercises tat was originally designed for astronauts could cure dyslexia, experts say. This revolutionary treatment transformed the reading and writing skills of kids with dyslexia, even allowing them to beat classmates with no learning difficulties in literacy tests.

The exercises have been designed to stimulate co-ordination and include walking downstairs backwards with one’s eyes shut, throwing a bean bag from one hand to the other and standing on a ball.

The treatment also improved the behavior of dyslexic children who suffered from attention problems and hyperactivity.

Many of the children currently have their behavior controlled by drugs. But it seems that the exercises could be far more effective, without any chemical side-effects.

One of the teachers who took part in the study said that the exercises had such a massive impact on the children, that it had ‘cured them of their learning and attention difficulties.’

Technology that was originally designed for astronauts, who suffer from a form of temporary dyslexia was used to develop the exercises.