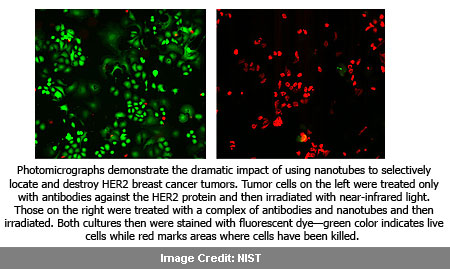 Technology is evolving at a sky-rocketing pace these days. Single-walled nanotubes that are actually cylinders of carbon having a diameter of about a nanometer seem to find an important place in many potential applications. These include like ultra-strong fibers, electrical wires in molecular devices, or hydrogen storage components for fuel cells.

Now a novel advancement by investigators at the National Institute of Standards and Technology (NIST) and five partners shows that nanotubes could be combined with antibodies for searching and destroying breast cancer. The researchers suggest the detection and destruction of an aggressive form of breast cancer via nanotubes.

Two copies of HER2 are found in normal cells while nearly 20 to 25 percent of breast cancer cells claim to possess multiple copies of the gene. HER2 is known to belong to a family of genes that aids in regulation of the growth and proliferation of human cells. The multiple copies found in breast cancer cells may result in the overproduction of a HER2-encoded protein simply called HER2. The protein is apparently linked to rapidly growing and difficult to treat tumors.

An antibody that had been developed to attack the HER2 protein namely chicken immunoglobulin Y (IgY) was fastened to short nanotubes that were about 90 nanometers long by the NIST-led research team. Scientists believe both halves of the special combination mainly the antibody and the nanotube to play important parts in selectively hunting down the HER2 tumor cells and eliminating them.

Researchers suggest that primarily the wide genetic differences between avian and human species could imply that the chicken IgY antibody to HER2 may be reacting strongly with the target protein expressed on tumor cells. All this, while disregarding normal cells having other human proteins. Additionally, the carbon nanotubes that were attached to the antibodies were also found to be associated with the HER2 tumors.

Experts believe that two distinct optical properties of carbon nanotubes may be enabling this connection to be exploited for enhanced identification and destruction of HER2 breast cancer cells. By a technique named Raman spectroscopy, a strong signal that is a result of near-infrared laser light at a wavelength of 785 nanometers reflecting strongly off the nanotubes may be detected. On increasing the wavelength of the laser light to about 808, the researchers reveal would render its absorption by the nanotubes. This could incinerate them as well as anything to which they are bound. In this case, it was the HER2 tumor cells.

Conducted in laboratory cell cultures, the experiment utilized the HER2 IgY-nanotube complex to selectively identify and target HER2 tumors. Keeping close by normal cells unharmed, this supposedly led to about 100 percent elimination of the cancer cells. For cultures treated with anti-HER2 antibody alone, there was comparatively only a slight lowering in cancer cells.

The research team looks at conducting mouse trials of the HER2 IgY-nanotube complex as the next step. This, they hope will allow them observe if the exciting cancer-killing capability functions in animals also just like it did in the lab. In another project that is different yet related to this one, the researchers also intend to utilize a nanotube-antibody combination against another tumor cell protein, MUC4, to treat pancreatic cancer.

These findings have been recently published in BMC Cancer.