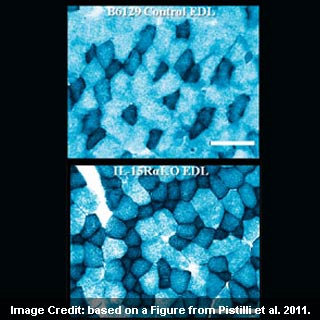 Ever wondered why some individuals run miles at a stretch while others may often wear out? Well, scientists seem to have the answer. Researchers at the Perelman School of Medicine at the University of Pennsylvania have stumbled upon a gene for endurance, or seemingly a negative regulator of it.

Knockout mice that did not possess this gene appeared to have greater endurance. According to the analysts, the gene is associated with Olympic-level athletes in endurance sports such as swimming than those taking part in sprint sports such as the 100-meter dash. The result can be used for enhancing muscle work in disease states that includes metabolic disorders, obesity, and aging.

“We have shown that mice lacking the gene run six times longer than control mice and that the fatigable muscles of the mouse — the fast muscle in the front of the leg — have been reprogrammed and are now fatigue-resistant. This has wide ramifications for various aspects of muscle biology ranging from athletics to treating muscle and metabolic diseases,” explained senior author Tejvir S. Khurana, MD, PhD, professor of Physiology and member of the Pennsylvania Muscle Institute.

The gene encrypts for a protein called Interleukin-15 receptor-alpha also known as IL-15R-alpha, which acts singlehandedly or collectively with the IL-15 protein. The latter is crucial in the immune response, but it also has other utilities. IL-15 and IL-15R-alpha have been implied in muscle physiology, but the precise work in muscle functionality remains undefined.

It was also revealed that the loss of IL-15R-alpha causes a transit in the way energy is burned in fast muscles, thus increasing fatigue resistance and exercise capacity. The molecular signature of the muscles in the knockout mice comprised of a larger number of active transcription factors, indicative of more muscle fibers with greater mitochondria, and the mechanism to improve process calcium as this chemical fuels muscle contraction.

Morphologically, the fast muscles seemed to have large number of muscle fibers, smaller fiber areas, and a greater number of nuclei per fiber. The modifications of physiological properties and growing resistance to fatigue in the fast muscles go parallel to a movement tending to a slower, more oxidative muscle type in the knockout mice.

The revelations also show prominent relations between the gene and elite endurance athletes that supports the probability that they had a genetic predisposition or benefit. Based on these 2 lines of thought, the researchers came to the conclusion that IL-15R-alpha is responsible for attributing the function of fast skeletal muscles.

IL-15R-alpha regulation is of prime importance for an athlete considering that there are no methods to gauge its misuse. The analysts identify a druggable target that permits reprogramming of muscle function. The team will conduct trials to comprehend the contribution of IL-15R-alpha in obesity, diabetes, aging and muscle diseases. Means to make use of its therapeutic abilities are also underway.

The research appears online this week in the Journal of Clinical Investigation.