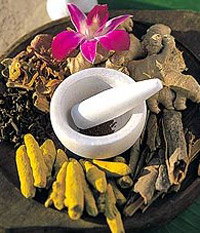 A team of British and Indian scientists have been testing the 5,000 year-old traditional healing medicine Ayurveda in the search for a cure for Alzheimer’s disease, and researchers have already announced that Ayurveda can be as effective as prescription drugs in boosting the mental agility of patients.

Ayurvedic medicine uses a variety of everyday herbs and spices, such as aloe vera, basil, garlic, ginger and turmeric, as well as yoga exercises, and this mix has proved to be beneficial to many people in the treatment of both physical and psychological problems.

The researchers studied five of the plants used in the production of Ayurvedic medicine, but, as one of the British members of the team, Professor of Pharmacognosy at King’s College London, Peter Houghton, pointed out: “The work is still at the lab stage and nothing has been tested on humans as yet. No clinical studies have been done and just because we get interesting results from the lab doesn’t mean people will be cured.”

Nevertheless, the scientists, including experts from Jadavpur University in Kolkata, have found that the five plants they concentrated on helped prevent the breakdown of neurotransmitters in the brain, so improving the memory and concentration of people suffering from Alzheimer’s.

The next stage is for the scientists to identify the chemical compounds in the plants. Once they have achieved that aim, and it is an aim that, sadly, could take years, then it should be possible to develop effective drugs incorporating those chemical compounds.

If those innovative drugs can be developed, then, at last, there will be real hope of a lasting cure for a disease that afflicts an ever-growing number of people across the world.

Until that happens, the usual therapies, as well as a selection of existing drugs, will continue to be used in the treatment of the disease to try and stimulate the patient. These range from simply encouraging people to reminisce about their past in order to reduce their depression, to art therapy and music therapy.