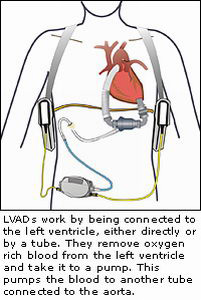 According to new research, mechanical ‘artificial hearts’ can be used to return severely failing hearts to their normal function, potentially removing the need for heart transplantation.

The mechanical devices, known as Left Ventricular Assist Devices (LVADs), are currently used in patients with very severe heart failure whilst they await transplantation. The new study, published in the New England Journal of Medicine, shows that using an LVAD combined with certain drug therapies can shrink the enlarged heart and enable it to function normally once the LVAD is removed.

For the study, researchers from Imperial College London and the Royal Brompton and Harefield NHS Trust gave the full combination therapy to 15 severely ill patients. Of these 15, 11 recovered. Of these, 88 percent were free from recurrence of heart disease five years later. Their quality of life was measured as being at nearly normal.

“Donor heart transplant has for many years been the gold standard in the treatment of those with severe heart failure. It has proven greatly successful but is not without its shortcomings – particularly the shortage of donor hearts and the risk of organ rejection,” said Dr. Emma Birks, from the Heart Science Centre at Imperial and the Royal Brompton and Harefield NHS Trust, and lead author of the study

“This therapy has the potential to ease the pressure on the waiting list while also offering patients a better alternative to a donor heart – their own, healthy heart,” she added.

Professor Sir Magdi Yacoub , from the Heart Science Centre at Imperial and the Royal Brompton and Harefield NHS Trust, said: “We are impressed by the dramatic, sustained improvement in the condition of these severely ill patients and we believe that this is due to the additive effects of the particular combination therapy used. The improvement observed was far greater than what has been reported to date for any other therapy in patients with severe, but less advanced, forms of heart failure.

“The study also highlights the fact that ‘end stage’ heart failure can be reversed and that the heart has the capacity to regenerate itself. It therefore stimulates the search for other strategies and more therapeutic targets in this expanding field of regenerative therapy,” he added.

LVADs are currently mainly used in those patients awaiting heart transplant, whose heart failure is very severe. The researchers are hopeful that the technique used in this study could also be used to restore heart function amongst heart patients who are not awaiting transplants.

LVADs work by being connected to the left ventricle of the heart, either directly or by a tube. They remove oxygen rich blood from the left ventricle and take the blood to a mechanical pump. The mechanical pump then pumps the oxygen rich blood into another tube which is connected to the aorta. Once blood is in the aorta, it can be transported to the rest of the body.

Patients were treated with drugs which encourage reverse remodelling of the heart, prevent atrophy and prevent the heart from shrinking beyond its desirable size. The drugs used were lisinopril, carvedilol, spironolactone and losartan in the first stage of treatment and bisoprolol and clenbuterol in the second.

The next step for the researchers is a larger multi-centre trial named the Harefield Recovery Protocol (HARP) study, which is envisaged to start soon on both sides of the atlantic. The researchers are also continuing their molecular and cellular research and studying the mechanistic and therapeutic targets which have made the recovery observed in this study possible.