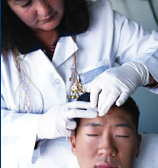 German researchers have conducted a study which shows that a gentle electric current, when applied to the brain during sleep actually helps to boost one’s memory.

Jan Born, who works at the University of Luebeck in Germany says that students who were administered half and hour of brain stimulation with electric current while in deep sleep, whowed a significant improvement of about 8per cent in their performance at a verbal memory task.

The researchers also say that the approach enhances memory by creating a form of electric current in the brain seen in deep sleep.

Born and his colleagues recruited 13 healthy medical students for the study, and gave them a list of word associations, such as ‘bird’ and ‘air’, to learn late in the evening. Thereafter, the researchers placed two electrodes on the forehead and one behind each ear of the volunteers, and let them sleep.

The students were monitored during various sleep stages with the help of an electoencephalogram (EEG) machine.

When they entered a period of light sleep, the researchers started to apply a gentle current in one-second long pulses, every second, for about 30 minutes. The EEG readings showed that the current had put students into a deeper state of sleep.

The next morning, the students were again given the word memory test in which they performed eight percent better than they had before brain stimulation.

Born believes that when a person is in deep sleep, strong brain currents cause more intense nerve firing, which might enhance activity in the brain’s memory centre, the hippocampus.

However, he says that he would be “a little hesitant” to regularly use brain stimulation during sleep to boost memory, as his team is yet to find evidences stating that this method does not have any side effects.

“In the end we don’t know if there are adverse side effects that we just don’t recognise at the moment,” Born added.