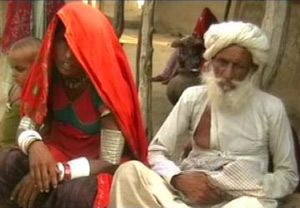 An 88-year-old Indian farmer, who has never heard of Viagra, became the father of a baby boy and has sex daily and wants more kids.

“I don’t want to live to 100 but, as long as I live, I should be able to enjoy sex,” Virmaram Jat, who lives in a village in the Barmer district in the western desert state of Rajasthan, was quoted in the newspaper as saying.

The prosperous farmer, with a flowing white beard and a weather-beaten face, says he takes long walks every day and has been drinking fresh camel milk since childhood.

The paper reported his latest wife — his third — is 45 years younger and delivered male twins last month, but only one boy survived.

But Jat celebrated the birth of the surviving son with a feast for villagers and said he will try for more children.
The octogenarian, who is a vegetarian and has never smoked cigarettes or drunk alcohol, is ready to share his knowledge with others.