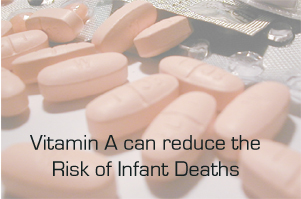 In a study conducted in India, vitamin A supplements given in the early newborn period reduced the risk of infant deaths from diarrhea, fever and respiratory infections, but did not reduce the occurrence of these problems.

Dr. James M. Tielsch from Johns Hopkins University in Baltimore and his team at the Aravind Centre for Women, Children and Community Health in Madurai, south India, randomly assigned 5,786 newborns to receive vitamin A supplements within the first 48 hours after birth and 5833 newborns to receive inactive “placebo.”

Infants in both groups were followed up through home visits for 6 months and details of illness were recorded.

Death rates due to diarrheal diseases and fever were markedly lower among vitamin A-treated infants compared with those given placebo. There was also evidence that vitamin A reduced the risk of death from respiratory infection, Tielsch and colleagues reported.

However, as noted, vitamin A supplementation did not actually reduce the occurrence of diarrheal disease, fever, or respiratory infection, the researchers report.

“It is…a consistent finding in almost all vitamin A supplementation studies done in low-income countries over the past 20 years that we see important positive effects in reducing mortality, but the incidence of (illness) is not changed,” Tielsch said.