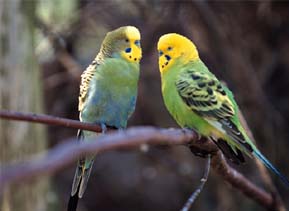 If you are a strong believer in the notion that ‘opposites attract’ then you need to think again.

A study conducted at the University of California, Irvine, revealed that a female budgerigar prefers to mate with a male that sounds like her. Biologists Marin Moravec, Professor Nancy Burley and Professor Georg Striedter carried out the study, which was published in Ethology in early November. The common view of ‘opposites attract’ was further flawed by the study that also found that males that paired with more similar-sounding females gave more help to the females when they were nesting.

Budgerigars, nicknamed budgies, are small Australian parrots that produce highly variable contact calls. The budgerigar is one of the few parrots to be domesticated as a pet. Previous research showed that male budgerigars spontaneously emulate the calls of females that are potential mates. Further on, females were known to prefer males that had been trained to produce calls similar to theirs. The current study is significant since it shows that female budgerigars prefer pairing with males that sound like them at their first meeting, before any imitation has occurred.

Interestingly parrots display a gift, rare among most animals, of learning new vocalizations throughout their lifetime. A highly social, monogamous species, the budgerigar likely uses multiple aspects of vocalizations when choosing mates and maintaining long-term relationships. This study adds to the human understanding of the social functions of vocal learning. It also offers a remarkable avian example of a familiar mate choice strategy: choosing a mate with whom you have something in common.