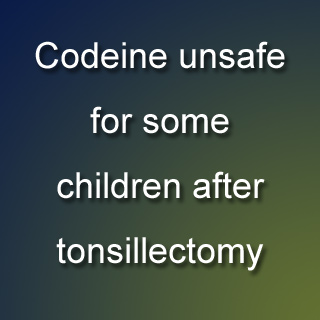 Experts from the University of Western Ontario cautioned against the use of codeine in order to treat pain which is followed by a tonsillectomy. Supposedly, tonsillectomy could be fatal for some children.

Gideon Koren, Ivey Chair in Molecular Toxicology at the Schulich School of Medicine & Dentistry, has focused his attention on the danger after having examined the death of a two year-old boy following a comparatively simple operation in order to remove his tonsils.

Enlarged tonsils are believed to be usually treated with antibiotics. However, Koren was of the opinion that tonsillectomies seemed to be still performed for sleep apnea. Sleep apnea is known to be a condition where the child stops breathing while asleep.

In this case, the toddler was noted to have a record of snoring. In addition, the study seemed to have confirmed of sleep apnea. Apparently, he was brought to an outpatient clinic where he had the operation done and was then taken home.

The toddler’s mother was provided with the syrup of codeine and was instructed how to manage it to her child for the purpose of reducing pain. However, on the following night after surgery, the child seems to have experienced fever and breathless, and was found dead the next morning.

It was observed that tests showed that the toddler’s mother had given appropriate dosage, yet his body showed increased levels of morphine. The physician asked Koren to examine at the case.

A pediatrics professor at Western and the University of Toronto, and director of the Motherisk program at the Hospital for Sick Children in Toronto, Koren stated that, “The sudden death of a healthy child was quite sobering because tonsillectomies are done every day, all over North America. And more and more of them are done on an outpatient basis, with the child going home the same day.”

The findings revealed that the child seemed to have an ultra-rapid metabolism genotype. Evidently, this genotype causes the body to process codeine at a faster rate thereby producing considerably higher amounts of morphine.

“If the apnea doesn’t go away, codeine will also suppress the child’s breathing. This demonstrates the need to keep children in hospital under surveillance for at least 24 hours to see if the apnea persists.”

Previous year, Koren published a research elucidating that mothers who were given codeine for pain following childbirth could perhaps transmit toxic levels of morphine. This transmission of morphine to their babies could take place through breast milk, if they carry this genotype.

It was estimated that nearly one percent of Caucasians carry this gene. However, the frequency may possibly be as high as 30 percent with people of African origin.

The Ivey Chair in Molecular Toxicology inspects why drugs could be harmless for most people, and yet life-threatening to some. Also, they try to discover ways in order to predict those situations.