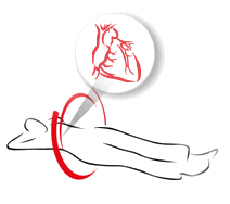 Cardiologists at Royal Brompton Hospital, England have developed a new technique of medical scanning that can spot children who are at risk of sudden death because of weak hearts. The scan shows up heart scar tissue, giving doctors an important warning sign of dilated cardiomyopathy (DCM), a condition in which the heart becomes weakened and enlarged, and cannot pump blood efficiently.

The whole process involves injecting a dye called gadolinium into the patient’s veins, and then scanning them using Magnetic Resonance Imaging (MRI).

Professor Peter Weissberg of the British Heart Foundation feels that the development of new technique is significant in the field of medical science, for it will help doctors prevent many young lives.

The researchers tested the technique on 101 patients with and without scar tissue, and followed them for two years to determine the effect of scar tissue on their health.

They say that the detection of the scar tissue helped them determine the risk of hospitalisation or death, which in turn enabled them to ensure that patients received timely and appropriate care.

“Prior to this technique it was difficult to decide which patients could be treated effectively using drugs alone, and which patients needed life-saving devices implanted,” he was quoted as saying. “It is a costly and wasteful exercise to implant all patients with DCM when only 20 or 30% may truly require it,” he added.

Professor Peter Weissberg, medical director of the British Heart Foundation, says that the latest technique will help doctors prevent lives from being lost to DCM.

“This is an important advance that will help doctors prevent lives being lost to the condition,” he said.