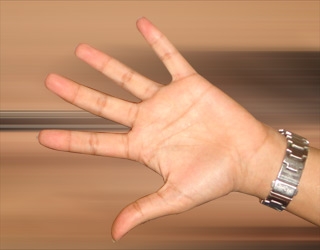 We all know dry skin and chipped fingernails are a cause for concern as far as our health is concerned. But researchers now suggest that there are many other reasons we need to pay attention to our hands. Apparently our hands contain important information about our health along with clues to hidden diseases even cancer.

The new study came to light after the palms of a 74 year old woman were tested positive for ovarian cancer.

Graham Easton, the study’s lead author and a family doctor in London commented, “I always try to shake hands when I meet a patient for the first time. I’m not being polite – their hands are packed with information about their general health, from whether they might have a thyroid problem to signs of osteoarthritis. In fact, doctors can often tell more about someone’s health by their hands than their face.”

According to the researcher, below are some signs on the hands we need to watch out for that will help us keep a tab on our health:

Club fingers: These could be a warning sign of lung cancer, TB or mesothelioma – a deadly lung disease linked to asbestos. It is apparently caused due to the building up of PGE2, a substance that dampens down inflammation in the lungs causing production 10 times more than the body needs of PGE2. This collects in finger tips causing them to swell and the tip of your fingers will be dome shaped or look like small clubs.

Blue fingernails: As the name suggest, finger nails appear blue in colour due to low oxygen in the body as blood is not being circulated properly. A warning sign of heart failure, the condition is also called as cyanosis.

Two-tone nails: This could be a signal of kidney failure and includes nails that appear pale white on the bottom half, near the skin, but a brownish shade on the top half. It is assumed to be caused by a collection of urea which crystallises under the skin and nails.

Sweaty palms: In case your palms are hot and sweaty, they indicate hyperthyroidism. An overactive thyroid causes the body to use more calories and hence generate more heat. A common symptom of this condition is feeling hot and sweaty all the time.

Beaded nails: A sign of rheumatoid arthritis, the signal is characterized by tiny beads on your nails that resemble candle wax dripping downwards. It is apparently vasculitis, an inflammation of the blood vessels under the nail bed, triggered by arthritis.

Bony lumps on fingers: Bony lumps that are pea-sized and painful to touch usually appearing around joints of the fingers could signal osteoarthritis in other parts of the body like hip and knees.

Fatty knuckles: Called as tendon xanthoma, these are hard, yellow bumps that protrude when you clench your fist. They are cholesterol deposits over the knuckles and are a warning sign of a potentially fatal condition called familial hypercholesterolaemia.

Reddened palms: A clear indication of liver cirrhosis, the condition is also called palmar erythema with reddening that usually affects the outer edge of the palm, near the little finger. An apparent cause is dilation of blood vessels in the skin normally because of changes in the hormone balance caused by liver disease.

Oversized Hands: These are an indication of pituitary tumour and symptoms include swollen and enlarged hands. Also called as acromegaly, the condition could also affect the feet, lips, nose and ears.

This study appears in the latest Journal of the Royal Society of Medicine.