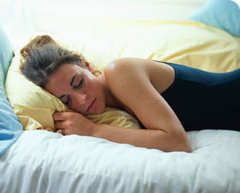 Women who are hoping to lose a few pounds should spend more time in bed, a new research suggests. A study published in the American Journal of Epidemiology has found that middle-aged women are much more likely to remain lean if they sleep well over a prolonged period. Whereas those only catching a few hours sleep per night, have an increased risk of putting on unwanted weight.

Researchers followed the progress of 68,000 women over a period of 16 years and the results add substance to previous conjecture that weight gain is linked to sleeping patterns.

Significantly, sleeping for more than seven hours per night was not linked to an increased risk of developing obesity over this 16-year period.

The reasons for these results remain unclear, but experts have suggested that sleep deprivation may have the capacity to alter hormones that affect appetite and metabolism. There is also a chance that those sleeping badly eat more and enjoy less exercise as a result of their fatigue.

“Overall, our findings suggest that short-sleep duration is associated with a modest increase in future weight gain and incident obesity. These findings have the important implication that increasing sleep time among those sleeping less than seven hours per night may represent a novel approach to obesity prevention,” the researchers said.