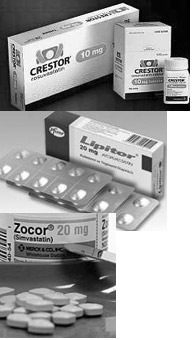 According to Dutch researchers, worldwide thousands of people taking cholesterol-lowering statin drugs are suffering from unnecessary heart attacks as they are not abiding by the treatment recommended to them.

Statins lower cholesterol by slowing down an enzyme that controls how much is produced in the body.

The researchers estimate up to 9,000 European and 7,000 American statin users have heart attacks that are avoidable. In the study published in the European Heart Journal they calculated that every year up to 400 statin users in the Netherlands have a heart attack that could have been avoided.

Dr Fernie Penning-van Beest, of the PHARMO Institute in Utrecht said, “Getting users to stay on statins and to use them persistently saves lives, and doctors must get over to patients the message that complying with treatment is essential.”

Heart disease is one of the biggest killers in Western countries and high cholesterol, along with smoking, diabetes, high blood pressure and being overweight, is a risk factor for ailment.

Pfizer’s Lipitor, Merck’s Zocor and AstraZeneca’s Crestor are among the leading statin drugs on the market.

The drugs are effective if taken properly, but some people may be taking doses that are too low or have stopped treatment.

The Dutch study of nearly 60,000 new statin users and their prescriptions in the Netherlands over a two-year period revealed that approximately half the patients stopped taking the drugs during that time. Roughly a third were on a high or intermediate dose.

The study found that hospital admissions for heart attacks dropped by 30 percent in statin users compared to patients not complying with the treatment. They believe that the impact of using the drugs properly would be similar in Europe and the United States.