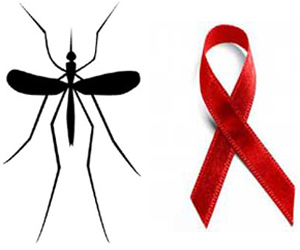 Scientists say that Malaria just may be the cause of the spread of AIDS, as it tends to boost the HIV in people’s bodies for as along as many weeks at a time. Researchers who have been conducting research in Washington have come to the conclusion that it is a vicious cycle when people who are weakened by HIV, usually are much more vulnerable to Malaria.

Researchers at the University of Washington first estimated the impact of the overlapping infections, and then concluded that the interaction (of Malaria and HIV) could be blamed for multitudes of HIV infections and almost a million cases of Malaria over the last twenty years, that too only in just one part of Kenya, Africa.

Thus the research, which was published yesterday itself, highlights the need for a joint attack on both Malaria as well as HIV. According to Dr. Anthony Fauci of the National Institutes of Health in US, “We really need to be much more serious about what we do about malaria.”

In fact Malaria effects up to half a billion people in a year and kills more than one million children. For a long time now, scientists have suspected that the two diseases fuel each other, even though they have totally different modes of transmission (malaria by mosquitoes and HIV mainly through sexual intercourse.)

According to the lead researcher, Laith Abu-Raddad, a scientist at the University of Washington, HIV is mostly spread when patients have high virus levels in their blood. In these high levels, just a bout of malaria can cause a sevenfold increase in these levels. He also added that once an HIV-positive person gets malaria, his or her viral load goes up tremendously and stays high for six to eight weeks. This obviously makes the person more infectious to others. Besides, HIV patients are more susceptible to malaria re-infection due to their weakened immune systems.

The study conducted by the researchers at the University of Washington created a mathematical model to figure out this whole cycle, and applied the above information to it. Abu-Raddad turned to Kisumu, Kenya, a region where he found data that records HIV and Malaria prevalence spanning decades.

Here is what the researchers found out. In regions where both Malaria and HIV are common, malaria may be responsible for almost 5 % of HIV infections, and HIV may be behind 10 % of malaria episodes. “It’s a substantial impact,” Abu-Raddad said.

Dr. James Kublin, an HIV researcher at the Fred Hutchinson Cancer Research Centre in Seattle, USA, and the study’s co-author, stressed that anti-malaria programs, which include insecticide spraying, bed nets to block mosquitoes at night and malaria treatments, must target HIV patients as well. Also, increasing access to HIV medications, that have the ability to lower viral levels means that if people do get malaria, they will not have an extremely infectious bout of the disease.