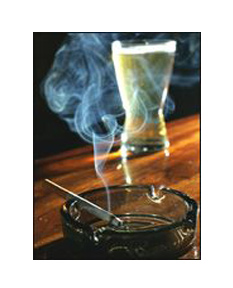 A drug called Chantix made by Pfizer that was recently approved as an anti-smoking drug may also be effective in curbing alcohol dependence. This was suggested based on a new animal study conducted by researchers at the University of California, San Francisco.

The study involved rats who had access to unlimited amounts of alcohol. Under these conditions the researchers steadily increased their (the rats’) alcohol intake over several months.

The very first day that the rats received just one dose of Chantix, they cut their drinking in half.

Furthermore, the rats received chantix every other day for a week, and during this period maintained their lower drinking level when the drug was discontinued, they returned to their previous level but no higher.

In addition, the drug did not kill appetite, unlike naltrexone, currently the most effective treatment to curb alcohol dependence.

“The biggest thrill is that this drug which has already proved safe for people trying to stop smoking is now a potential drug to fight alcohol dependence,” said Selena Bartlett, leader of the study.