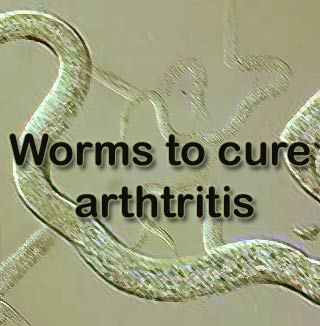 We are surely advancing towards novel methods to cure immumerable ailments. A team of Glasgow scientists from the universities of Glasgow and Strathclyde are now looking forward to use a substance secreted by parasitic nematode worms that may help provide a more effective treatment for inflammatory types of arthritis.

A parasitic filarial nematode worm secretes large molecules of a substance called ES-62 possessing anti-inflammatory properties. A team of scientists led by Professor Margaret Harnett, at the University of Glasgow’s Division of Immunology, Infection and Inflammation, now plan to take advantage of this property of the worm.

Already present in the blood of millions of people infected with the worms in the Tropical region, ES-62 has the potential to prevent massive inflammatory response that the worms are otherwise capable of producing in conditions such as elephantiasis.

“ES-62 appears to act like a thermostat to effectively turn down disease-causing inflammation which leaving essential defence mechanisms intact to fight infection and cancer. This property also makes ES-62 a unique tool for scientists to identifying how such disease-causing inflammation occurs,” revealed another member of the research team, Professor Experimental Medicine at the University of Glasgow, Iain McInnes.

Prof Harnett additionally mentioned, “We will exploit a mechanism optimised by human/parasite interactions over millennia to develop anti-inflammatory drugs. We will be focusing on mechanisms of combating hyper-inflammation that have developed naturally and with apparent acceptance by humans during their co-evolution with parasites.”

While the project is still in the initial stages, the researchers believe that ES-62 could be an eminent factor that links the rarity of auto –immune diseases like rheumatoid arthritis and multiple sclerosis in countries where parasitic worm infections are endemic. The team is hopeful to develop a synthetic derivative of ES-62 which could be used to develop new drugs to fight rheumatoid arthritis.

In addition to this, the scientists are optimistic that using the same approach may finally help them produce drugs for the treatment of other auto-immune diseases. These drugs they believe can be fine-tuned using a cocktail of several ES-62 derived drugs.

A promising treatment for arthritis, ES-62 has no known harmful effect on general health nor do they inhibit the ability of infected people to fight other infections.

The Arthritis Research Campaign has funded this research by a three-year grant of £213,700.