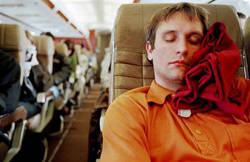 A study conducted has revealed that jet lag may not be a major problem or and issue for people who fly frequently, however its repercussions on health are quite apparent.

The University of Virginia conducted the study on mice, which showed that a majority of the elderly mice they were testing died while being subjected to the equivalent of a flight from Washington-to-Paris once a week for eight weeks, The Washington Post reported.

Jet lag is usually caused by crossing time zones during flight. The condition is generally believed to be the result of disruption to the circadian rhythms (i.e. the “light/dark” cycle) of the body. It can also be exacerbated by experiencing sudden changes in climate or seasonal conditions, as well as the reduced oxygen, partial pressure, excess noise and low humidity commonly experienced in the cabin of an aircraft. It is accompanied by grogginess, burning eyes, headaches, insomnia and fatigue. Experts said that the study is the first real scientific look into the effect of jet lag.

In addition, the study found that intense forms of jet lag sped up the death rate in mice. New attention has been focused on the problem and questions are being raised about whether severe jet lag can be harmful to frequent fliers’ health.

Though I wonder which class the mice were traveling by?