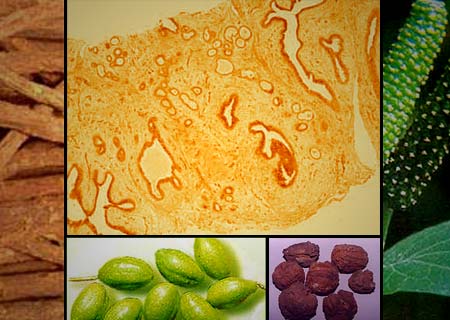 The word grantis is derived from word granthitha which literally means knotted. The etiological factors constitute the vitiated doshas which in turn affect the blood, muscular tissue and fatty tissue. Kapha slowly accumulates at the site where muscular and fatty tissue are vitiated and gives rise to round , elevated and slightly nodular swelling which is termed as granthi.

According to ashtangsangraha, there are four additional granthis.

All granthis do not become ripe. The abscess ripes within days while granthis takes weeks or months before it is ripe.

Ama stage – In the ama stage, oil or ghee medicated with prasarini and dashamula should be given to drink. Later the patient should be given emetics like madanaphala choorna to induce vomiting and give purgative. The physicians should see that the patient does not become weak while carrying out these procedures. Then granthis should be fomented and massaged.

Pakwa stage – when the granthi is ripe it should be completely removed by operation. The wound should be washed with decoction of triphala. After washing the wound, the paste of ghee medicated with yavakshara and honey should be applied. Many granthis remain in ama stage and keep on increasing and never becomes ripe. They should be removed in ama stage as early as possible. Later til oil medicated with vidanga, patha and turmeric should be sprinkled on the wound and gauze pieces dipped in the same oil should be applied over the wound and wound should be bandaged. Jatyadi oil or ghee is also helpful for healing the wound.

Patient suffers from stretching, pricking, splitting, cutting type of pain at the site of swelling. The swelling is black in color and hard in consistency. The discharge is scanty, serous and clear.

1. Hinsradilepa: A paste of hinsra, rohini (katuka), amruta (guduchi), bhargi, shyonak, bilva, agaru, drumstick, krushnagandha (gojivha) and musali should be applied locally. Later the granthi should be fomented with hot water till sweating is induced.

2. Riped granthi should be removed by surgery. The wound so created after surgical treatment should be washed with a decoction of bilva, pippali and amlavetas and cleaned with a paste of til oil. Castor leaves and saindhav oil medicated with powder of rasna and nishottar or oil and milk medicated with paste of yashtimadhu and guduchi should be instilled over the clean wound.

Pittaja granthi-abscess in the gland:

Swelling is associated with burning, fever. There is sensation as if the swelling is filled with smoke. It is red or yellow in color and tends to suppurate and when ripe the discharge is hot and blood stained pus.

1. Blood letting by leech application or intravenous canula is very useful in pittaja types of granthis.

2. Local spray of milk and water is useful.

3. Cold decoction of kakoli group of medicines with sugar should be sprayed over the wound.

4. Powder of haritaki may be administered with grape juice or sugarcane juice.

5. Paste of bark of madhuka, jambhu (jamun), arjuna and vetasa should be applied locally.

6. Ripe granthi should be removed surgically and the wound should be washed with decoction of skins of pippal, gular, etc. and banyan paste of til and ashtimadhu and ghee medicated with madhura group of medicines.

7. Kakolyadigana should be applied locally.

The swelling is cold to touch, hard and grows very gradually. The skin over swelling is usually not discolored or slightly discolored. It is associated with itching and very slight pain. When ripe, it gives rise to thick and white pus.

2. Sarji ksharadi lepa: a paste of equal parts of svarjikshar, kshara of radish and shankhachurna prepared in kanji should be applied locally in granthi, arbuda etc.

3. Snehan, swedan, induction of vomiting, purgation and blood letting are indicated to get rid of doshas in kaphaja granthi.

4. Sweating should be induced over the granthi by application of hot poultice and granthi should be massaged firmly by fingers or a hard stick so that the oedema is reduced. Later paste of kantakar aragvadha, raktagunja, kakadani, ingudi, katutunbi, arka, bhargi, karanja, tagar and madn root should be applied locally.

5. Paste of bark of madhuka, jamuna, arjuna and vetasa should be applied locally.

6. The granthi which does not subside by following appropriate treatment should be excised in the unripe stage, provided it is not over vital areas. After local bleeding stops the areas should be cauterized by heat.

These are comparatively large, fatty swellings associated with itching and slight pain. They grow very slowly. They usually grow in proportion to body growth and splitting, ghee (clarified butter) like discharge is present.

1. Poultice of paste of til and laksha should be applied over medaja granthi till sweating is induced and later it should be covered with a cloth. Branding is undertaken by applying heated iron rod over this poultice. But care should be taken to avoid heat burns.

2. The medaja granthi should be removed and the wound washed with cow’s urine and then paste of fine powder of til, sarjikshar, haritaki, and saindhav with sufficient quantity of honey, ghee, and yavakshar should be applied. Oil medicated with karanja, pootikaranja, gunja, lochana, ingudi, and gomutra should also be used.

These constitutes aneurysms, hemangiomas, etc. following injury or over exertion, the blood vessels become weak and dilated because of accumulation of particles of
vata and give rise to siraja granthi. Painful and mobile siraja granthi particularly in vital areas should not be operated. The patient should be given sahachara oil by mouth and if necessary 15 to 20 ml of blood should be removed by syringe.

The increased vata, pitta and kapha dosha accumulate in the wall of blood vessels and surrounding muscular tissue and give rise to swelling known as rakta granthi. Fever burning sensation and other symptoms of increased pitta are present. The treatment as prescribed in pitta granthi should be undertaken.

A localized swelling in muscular tissue is large in size and firm in consistency. It should be removed surgically and the wound should be washed with decoction of tripahala. Later a mixture of yavakshar and honey should be applied locally. Til oil medicated with a paste of vidanga, patha and turmeric should be used in clean and healthy wounds.

A long standing ulcer becomes a granuloma by growth of vitiated granulation tissue around the ulcer under the following conditions.

a. The patient with an ulcer does not follow the recommendation and restriction of diet.
b. If ulcer starts discharging secretions for a long time.
c. If the ulcers is not treated properly.
d. If the injury occurs at the site of ulcer.

The patient suffers from itching and burning at the site of vrana granthi. The granulomatous ulcer in vrana granthi should be excised completely, as early as possible, and the wound and its surroundings should be bandaid. Later the wound should be treated as usual.

Accumulation of adipose tissue and kapha molecules in lymph gland gives rise to apache. The word apache means glands which do not suppurate. These glands are of size of amalaka or betel nut and firm in consistency. They do not produce pain or pressure symptoms. After many months of swelling they discharge sticky serous substance for many days. If the adjoining glands are also enlarged, they appear like a mala, garland.

Hence the name is apache gandamala. Ganda means neck and mala means garland, so it becomes garland around neck. This description fits very much to lymphadenitis in tuberculosis as per modern medicine. These glands are actually lymph nodes in neck, armpit, and groin.

1. Medicated ghee by mouth.
2. Application of leeches.
3. Cleansing nose drops. – This is done by preparing a mixture of powder of yashtimadhu roots and seeds of drumsticks, seeds of apamarga. OR til oil medicated with nirgundi, tondle an karaveera (kanher). This oil is known as vyoshadi tel.
4. Medicated smoke inhalation- this is prepared from vidanga seeds, drumsticks, mustard and pipali. Gargle- with decoction prepared from guduchi, ginger, epper, pippali, and kiratakita.
5. Surgical removal of glands: this is done when the diseases is not controlled by medicines. If pain exists after surgery apply warm ghee medicated with yashtimadhu to the incision.
6. Branding the gland- to prevent bleeding.
7. Chemical cautery, burning the gland by application of caustics known as ksharas.
8. Panchkarma: purgatives and emetics to get rid of accumulated doshas like…
a) jeemutakyadi ghruta – this is ghee medicated with jeemutaka, koshataki, danti, dravanti, and nishottar. This gives rise to vomiting and loose stools.
b) chandanadi oil- til oil medicated with chandan, hareetaki, laksha, vacha and kutki 1-2 tsp twice a day.
c) Roots of cotton tree should be taken with rice washings.
d) Ghee medicated with nirgundi, jati, usheera, devangri, honey, and saindhav salt. If glands in neck are damaged, emetics should be used, while if glands in groin are enlarged then purgatives should be used.
e) Swedana, known as fomentation should be done till sweating occurs. This is done with warm salt or paste prepared by grinding together yava, mustard seeds and seeds of shami, raddish and drumstick in sour butter milk.
f) Application of paste over glands: paste of sulphur and mercury in equal parts and milky juice of arka, saindhav and skin of kanchanar.

Or sarshapadi lepa – burn mustard leaves, leaves of kauntimba and bhallataka ie, marking nut till the mask remains. Mix the ashes with cow’s urine and apply it on the gland.

Or when gland starts ripening apply paste of skin of kanchanar, root of chitrak and bachanag.

g) til oil medicated with tick tree.
h) Massage – with gunjadi oil. This is prepared by mixing 20 gms of powders of each gunja, shyama, arka, roots of mustard + 400ml of til oill + 1600ml of cows urine till it evaporates, later add 20 gms of powder of each. Bidalavan, saindhav, sauvarchala and pippali. This oil should be massaged over apache i.e., tuberculosis glands, piles, fistuls, and tumors.
i) Medicines that have to be taken are, karanja oil medicated with malkangani, karanja beeja, nirgundi juice, nishottar and devadangari should be given by mouth and also used for massaging glands and instilling in nose.

The above mentioned tablets and rasa could also prove useful.