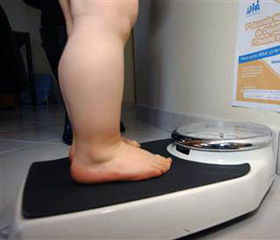 Kids who carry excess pounds may be doing permanent damage to their feet, a group of foot and ankle surgeons warns.

“When there is an increased amount of weight and stress being placed on the foot, that can cause some significant changes in foot structure,” Dr. Darryl Haycock, a foot and ankle surgeon in private practice in Lima, Ohio said.

Children’s feet aren’t fully developed until the age of 14 or 15 for girls, 15 to 17 for boys, meaning their foot bones are “easily moldable,” Haycock added.

As few as 15 to 20 extra pounds can contribute to flattening of the arches and inflammation of the growth plate in the heel, according to Haycock, who says he used to only see this type of foot pain in very active children, but is seeing it increasingly in overweight kids.

It’s difficult to determine whether children are obese because they have foot problems in the first place, which make it painful for them to be active, or whether the obesity is causing the changes in foot structure, Haycock added.

“It’s the proverbial chicken and the egg thing,” he said. Complicating matters is the fact that many children are born with foot deformities that can reduce their activity levels, such as flat feet or hammer toes.

But it is clear that foot problems in obese kids can cause a vicious cycle, with the foot pain making it more difficult for them to be active, which makes it more difficult to trim down, Haycock and his colleagues point out.

Treatment of foot problems generally begins with conservative therapies such as custom-made shoe inserts, known as orthotics, and physical therapy. If such approaches don’t work, surgery to correct the problem may be recommended.