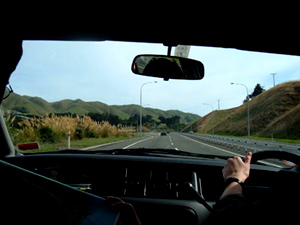 If you spend a lot of time behind the wheel, then you need to take care. No not of banging into another vehicle, but perhaps of developing the fatal ‘C’ of Cancer.

A U.S. researchers report states that people who spend a lot of time behind the wheel may be motoring their way to a greater risk of skin cancer on the left side of their body

According to Dr. Scott Fosko, professor and chairman of dermatology at Saint Louis University School of Medicine, “Since previous scientific findings have shown an association between one-sided exposure to ultraviolet light (UV) and an asymmetric facial distribution of sun damage, we would expect that skin cancers also would be more prevalent on the left side of the body in drivers who spend a significant amount of time in their cars.”

“Our initial findings confirm that there is a correlation between more time spent driving and a higher incidence of left-side skin cancers, especially on sun-exposed areas in men,” Fosko continued.

Fosko and his team studied 898 people (559 men and 339 women) with skin cancer on either side of the body. Amongst the 53 percent of patients with left-side skin cancers, 64 percent were men and 36 percent were women.

In addition, the researchers also found that men, but not women, had a statistically significant number of left-side skin cancers on areas such as the arms, hands, neck and head, that are most often exposed to sunlight/UV radiation while driving.

Until January 2007, Fosko and his team had collected 70 completed questionnaires designed to evaluate the driving habits of dermatology patients. Initial results show a direct link between driving time and left-side skin cancer risk.

The research was expected to be presented Friday at the annual meeting of the American Academy of Dermatology, in Washington, D.C.

Dr Fosko suggested tinting the side window glass or using UV filters on windows might help reduce a driver’s risk of harmful exposure.

Cancer Research UK recommends, “Although glass greatly reduces the risk of sunburn, it does not prevent long term damage from UVA. So if you are driving long distances or sitting in your conservatory every day for long periods of time, with the sun beaming in on you, then you are putting yourself at risk.”

However Josephine Querido, cancer information officer for the charity, stressed this did not necessarily mean that you would get skin cancer.

“In terms of the amount of UV sunlight people are exposed to during the course of a year, the amount received through car windows is likely to be a very small percentage. It is important to take care whenever you are exposed to the sun, to know your skin type, and, above all, never burn as this can double your risk of getting skin cancer,” she said.