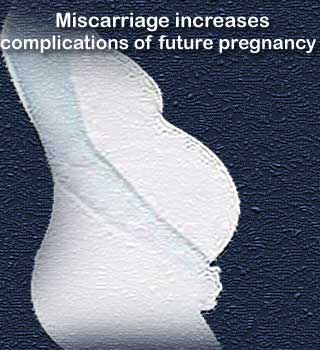 If you have already suffered from a miscarriage and cant wait to get pregnant again-Beware! An alarming study conducted by researchers at the University of Aberdeen suggests that women on the rack of miscarriage have increased chances of dangerous complications in future pregnancies.

“This is the first study of its kind to assess the impact of an initial miscarriage on the next ongoing pregnancy. Previous work has focused on the consequences of three or more miscarriages, although for most women, a single miscarriage is far more likely. While for most women these risks are small, increased obstetric surveillance should not be restricted only to women with multiple miscarriages,” mentioned Dr Sohinee Bhattacharya, lead researcher from the Dugald Baird Centre for Research on Women’s Health at the University of Aberdeen and Aberdeen Maternity Hospital.

The new study involving nearly 32,000 expectant mothers reveals that a single miscarriage may put the mother at life-threatening conditions like pre-eclampsia which in severe cases can cause stroke or severe bleeding from the placenta. The scientists discovered that women who lose a baby are more prone to give birth prematurely and also have increased risks of induced labour and dangerously high blood pressure miscarriage.

Fatal situations for women who have suffered a miscarriage include a 3.3 times higher risk of pre-eclampsia and 1.7 times increased chances of a threatened miscarriage, in which they have symptoms of a miscarriage but do not actually miscarry. The scientists at the University also found that these women were 1.3 times more likely to have bleeding after 24 weeks in their following pregnancy as against women who had a successful first pregnancy. Well, their list of complications doesn’t end here.

The chances of having labour induced pregnancy was nearly two fold while the cases of an instrumental vaginal delivery, such as the use of forceps was six times higher for women who have suffered a miscarriage.

Researchers advise women to be monitored, particularly those who have recurrent miscarriages to avoid these complications. Though most women are far more likely to suffer from a single miscarriage, earlier researches have focused more on the consequences of three or more miscarriages.

These findings are published in the BJOG: An International Journal of Obstetrics and Gynaecology.