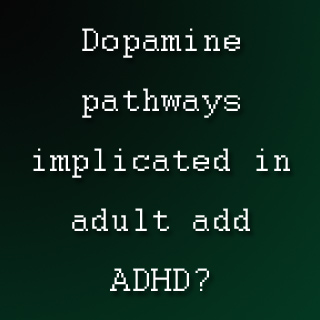 The outcome of brain scans appears to see a link between a decline in the transmission of dopamine markers with symptoms of inattention for people with attention deficit / hyperactivity disorder (ADHD). This is according to a new study which is still in the initial stage.

ADHD is a childhood psychiatric disorder that may often continue into adulthood. In the US adult population, it is apparently estimated to affect around 3 to 5 percent. This makes the disorder quite common as compared to other psychiatric disorders. This is as per the background information in the article. Preceding research has claimed that dopamine transmission may be disturbed in certain pathways of the brain in ADHD.

A study was conducted by Nora D. Volkow, M.D., of the National Institute on Drug Abuse, Bethesda, Md., and colleagues, to establish whether there could be abnormalites in the mesoaccumbens in patients suffering from ADHD. The experts apparently produced brain images with positron emission tomography (PET) to assess dopamine synaptic markers (transporters and D2/D3 receptors) in about 53 nonmedicated adults with ADHD and roughly 44 healthy controls.

The authors commented, “This study provides evidence in favor of the predicted disruption in the mesoaccumbens dopamine pathway in ADHD. With PET imaging, lower D2/D3 receptor and DAT [dopamine transporters] availability in those with ADHD than in the control group was documented in 2 key brain regions for reward and motivation (accumbens and midbrain). The lower than normal D2/D3 receptor and DAT availability in the accumbens and midbrain regions supports the hypothesis of an impairment of the dopamine reward pathway in ADHD.”

The authors added that their findings of an association of the mesoaccumbens dopamine pathway with ADHD inattention symptoms may have clinical relevance. This pathway plays a key role in reinforcement-motivation and in learning stimuli-reward associations, and its involvement in ADHD supports the use of interventions to enhance the saliency of school and work tasks to improve performance.

Both motivational interventions and contingency management have been shown to improve performance in ADHD patients. Also stimulant medications have been shown to increase the saliency of a cognitive task i.e. motivation or interest in proportion to the drug-induced dopamine increases in striatum which is a region of the brain.